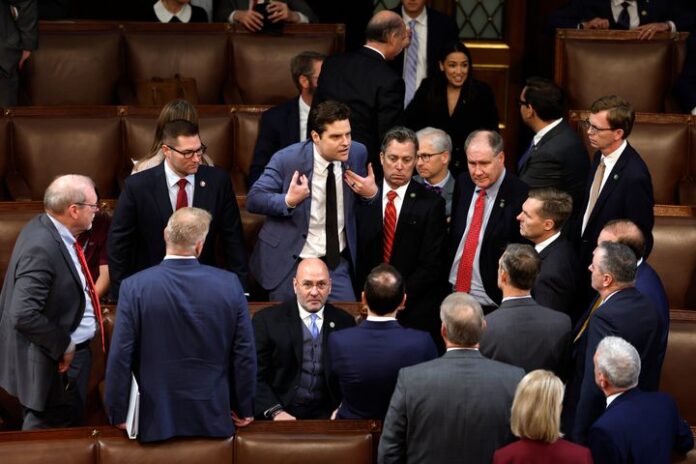 WASHINGTON ― As the chaos unfolded on the floor of the House of Representatives this week and Republicans struggled to elect a speaker, some lawmakers couldn’t help but see links to the violent Jan. 6, 2021, insurrection that took place here two years prior.

Many of the same far-right Republicans who supported or played key roles in the effort to overturn the 2020 presidential election based on false claims of fraud are now engaged in a historic speaker blockade that has delayed the formation of the House and ground all legislative business to a halt. President Joe Biden has called the episode “embarrassing” and warned it would erode America’s image around the world.

On Friday, the second anniversary of the attack on the U.S. Capitol, the House will try for the 11th time to elect a speaker. House Minority Leader Kevin McCarthy (R-Calif.), who also voted to overturn the 2020 presidential election, has failed to win a majority 10 times ― more than any speaker elections since the Civil War.

Rep. Nancy Pelosi (D-Calif.), the former House speaker, has watched the events unfold on the House floor this week along with other rank-and-file Democrats. She told reporters “thank God” Republicans weren’t in the majority two years ago “because that was the day you had to be organized to stave off what was happening.” Pelosi beat McCarthy, 216–209, on the first vote for speaker on Jan. 3, 2021, an election that allowed the lower chamber to organize itself and, a few days later, certify the 2020 election results after hours of armed warfare at the Capitol.

Pelosi wasn’t the only Democrat who drew parallels between this week’s mayhem and the Jan. 6 insurrection. Rep. Joe Neguse (D-Colo.) on Thursday noted that Republicans have a bad track record when it comes to governing, citing the lengthy 2018 government shutdown the GOP instigated over immigration and the 2021 riot at the Capitol.

“Two years ago, tomorrow, I stood here with so many of you in this chamber, as our democracy was attacked, as our colleagues on the other side of the aisle tried to overturn an election,” Neguse said in a speech on the House floor.

“This is not their first rodeo, as far as dysfunction is concerned,” he added.

“He tried to overthrow our government!” Cohen yelled Thursday on the House floor. Gaetz didn’t respond, and Trump ended up losing another election ― badly.

Republicans, meanwhile, have avoided making any mentions of the anniversary of the Jan. 6 attack. Rep. Scott Perry (R-Pa.), the House Freedom Caucus chair who is opposed to McCarthy’s speaker bid, claimed he and his fellow group of rabble-rousers are doing it to save the republic. “It’s not about the timeline, it’s about democracy,” Perry told a reporter who inquired about the next steps.

Perry led efforts to overturn Pennsylvania’s election results in 2020 on behalf of Trump. He also sought a presidential pardon over it, according to the House select committee that investigated the Jan. 6 insurrection.

A pair of police officers who defended the Capitol on Jan. 6 also weighed in amid the failed speaker votes this week. Capitol Police Officer Harry Dunn, who faced racial slurs and harassment from rioters on Jan. 6, responded to a number of Republican lawmakers who sought to downplay the drama by calling democracy “messy.” In a tweet, Dunn called the line “ironic,” adding that defending democracy on Jan. 6 was actually the messy part.

Whats so ironic about what is happening with the vote for speaker right now, whatever you wanna call what is happening, is exactly what we fought to defend two years ago. Many people in their nomination speeches have said “democracy is messy” Nah… defending it was “messy” #Jan6

Former Metropolitan Police Department Officer Michael Fanone, who was beaten and shocked with a stun gun during the attack on the Capitol, paid a visit to McCarthy’s new office at the Capitol.

“I heard he was having some trouble … I just came here to rub it in,” Fanone told reporters, pointing to the spot where the speaker’s name would normally be inscribed on a wooden plaque.

Fanone also spoke at a rally on Thursday outside the Capitol, where he criticized McCarthy for making key concessions to far-right lawmakers, including offering them chairmanships and more power, as part of his quest to become speaker.

“This is just the beginning. This type of chaos will happen every single day in the House as some of the most extreme politicians our country has ever seen hold our democracy hostage,” Fanone said at the rally. “Our elected leaders allowed this to happen, and yet this week people who encouraged and even attended the insurrection are now taking their places as leaders in the new House majority.”

Biden will award Dunn, Fanone and 10 others who “demonstrated courage and selflessness” defending democracy on Jan. 6, 2021, the Presidential Citizens Medal at the White House on Friday. The award is one of the nation’s highest civilian honors, and it will be Biden’s first time awarding one.

Rep. Hakeem Jeffries (D-N.Y.), the Democratic nominee for speaker, will also hold an event in the Capitol on Friday morning commemorating the second anniversary of the attack.