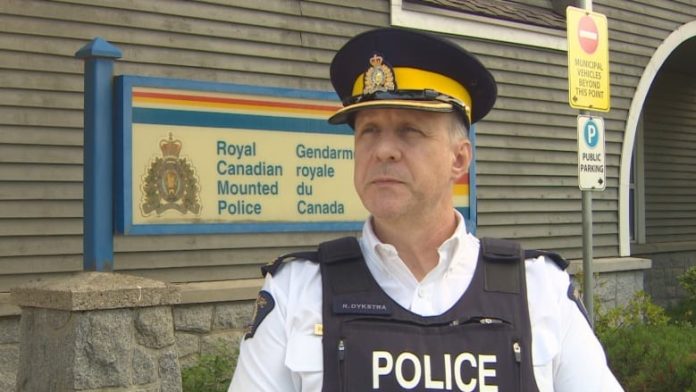 Police say two people are dead and two suspects have been arrested after a shooting at the mountain resort of Whistler, B.C., on Sunday afternoon.

Inspector Robert Dykstra, the officer in charge of the Sea to Sky RCMP, said officers were on patrol when a report came in just after noon of shots fired at a hotel in Whistler Village.

“They found one male there obviously deceased and a second male in distress,” said Dykstra.

Efforts were made to save the man’s life, but he was later declared dead in hospital, he said.

Officers followed a vehicle on Highway 99, stopped it near Squamish, and two people were arrested in connection with the shooting, Dykstra said.

The Integrated Homicide Investigation Team will be taking over the investigation, with assistance from British Columbia’s anti-gang agency, the Combined Forces Special Enforcement Unit, and others.

Dykstra said he doesn’t know the names of the victims and isn’t aware if they were known to police.

Police tape and a paramedic vehicle were seen in Whistler Village, outside Showcase Snowboards, at Sundial Crescent on Sunday afternoon.

An area of the storefront was cordoned off, with emergency responders on site. People sheltered within nearby businesses after unconfirmed reports of a shooting spread on social media.

The owner of a Whistler Village grocery store told CBC News they were keeping their doors closed as a precaution on Sunday afternoon.

“It does have an impact in the community and people are afraid,” said Dykstra. “We don’t believe the public is at any risk of any further danger.”

Whistler Blackcomb closed for the day

Activities at the popular tourist destination, located 120 kilometres north of Vancouver, were shut down after the shooting was reported.

“RCMP have officially cleared the Whistler area of any imminent danger,” said Whistler Blackcomb Operations in a tweet at 3 p.m.

“Out of respect for all of those impacted, and our guests and team members, we will be closing Whistler Blackcomb for the rest of the day, effective immediately.”

Spokesperson Sara Roston said in a statement that the resort team is “shocked and deeply saddened by this senseless act of violence.”

RCMP say they will be sharing further information when it’s available and have asked witnesses or anyone with information regarding the incident to contact the Whistler detachment at 604-932-3044.