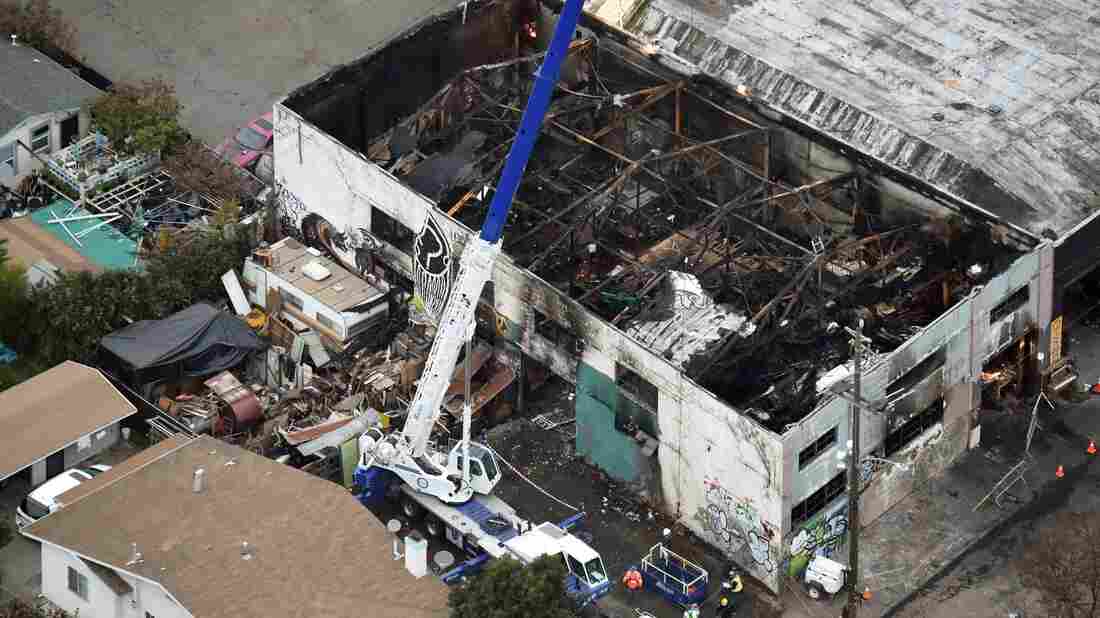 A crane is used to lift wreckage as part of search efforts in a fire-ravaged warehouse on December 5, 2016, in Oakland, Calif. Josh Edelson/AFP/Getty Images hide caption

A crane is used to lift wreckage as part of search efforts in a fire-ravaged warehouse on December 5, 2016, in Oakland, Calif.

Two men are facing criminal charges in connection with a deadly warehouse fire in Oakland in December 2016.

The “Ghost Ship,” a warehouse that was used as a residence and performance space, caught fire during a concert and dance party on Dec. 2. People were trapped inside the crowded space; 36 people died.

Now the Alameda County district attorney has filed 36 counts of involuntary manslaughter against Derick Almena, the manager of the space, and Max Harris, who is accused of planning the event.

According to The Mercury News, DA investigator Cristina Harbison wrote in court documents that Almena was repeatedly warned about the dangerous situation he was creating, as he filled the warehouse with flammable materials and rented it out to sub-tenants.

Harris was Almena’s “creative director,” the local newspaper reports, and is accused of planning the Dec. 2 event and blocking off one of two exits as he prepared for it.

District Attorney Nancy O’Malley said the men “knowingly created a firetrap with inadequate means of escape” and may face up to 39 years in prison if they are found guilty, The Associated Press reports.

Almena, the warehouse manager, spoke to the Today show after the disaster. It was an uncomfortable conversation, as we reported at the time:

“After Matt Lauer welcomed him with “good morning,” Derick Almena shook his head.

“When asked if he should be held accountable for the disaster, Almena — who has been accused of failing to correct unsafe conditions — said, ‘What am I going to say to that? … I can barely stand here right now.’

“Further questions from the hosts about the possibility of criminal charges seemed to agitate Almena, who ultimately said:

” ‘I’m an honorable man. I’m a proud man. I’m not going to answer these questions on this level. I’d rather get on the floor and be trampled by the parents — I would rather let them tear at my flesh than answer these ridiculous questions.

The “Ghost Ship” warehouse was not zoned for residential use, but Almena ran it as an artists’ collective. He told the Today show that he didn’t think the space was dangerous, as evidenced by the fact that he usually lived there with his children; he said they stayed at a hotel the night of the party to get some sleep.

Reuters has more on the fire itself:

“On Dec. 2, flames raced through what authorities say was an illegal dance party on the second floor of the sprawling two-story building, which was permitted as a warehouse but leased to an artists’ collective.

“It was the deadliest blaze in the United States since 100 people perished in a 2003 nightclub fire in Rhode Island.

“The 10,000-square-foot building lacked sprinklers and smoke detectors, and wooden pallets partially formed a makeshift stairway between the first and second floors, officials have said. It had just two exterior doors.”

Filing criminal charges against the manager and organizer won’t end the debate over who should be held accountable for the fire.

Reuters has previously reported that before the fire, city officials “had multiple opportunities to see that residents were illegally living there in hazardous conditions,” but failed to take action.

“Oakland officials have repeatedly denied that fire and building officials were aware of the danger,” the Los Angeles Times writes, although “public records released by the city in February show the building had been subject to at least 10 code enforcement complaints.”

As KQED’s Sandhya Dirks has reported for NPR, there are also concerns about how a crackdown on illegal living spaces might affect artists struggling to live in the gentrifying Bay Area.