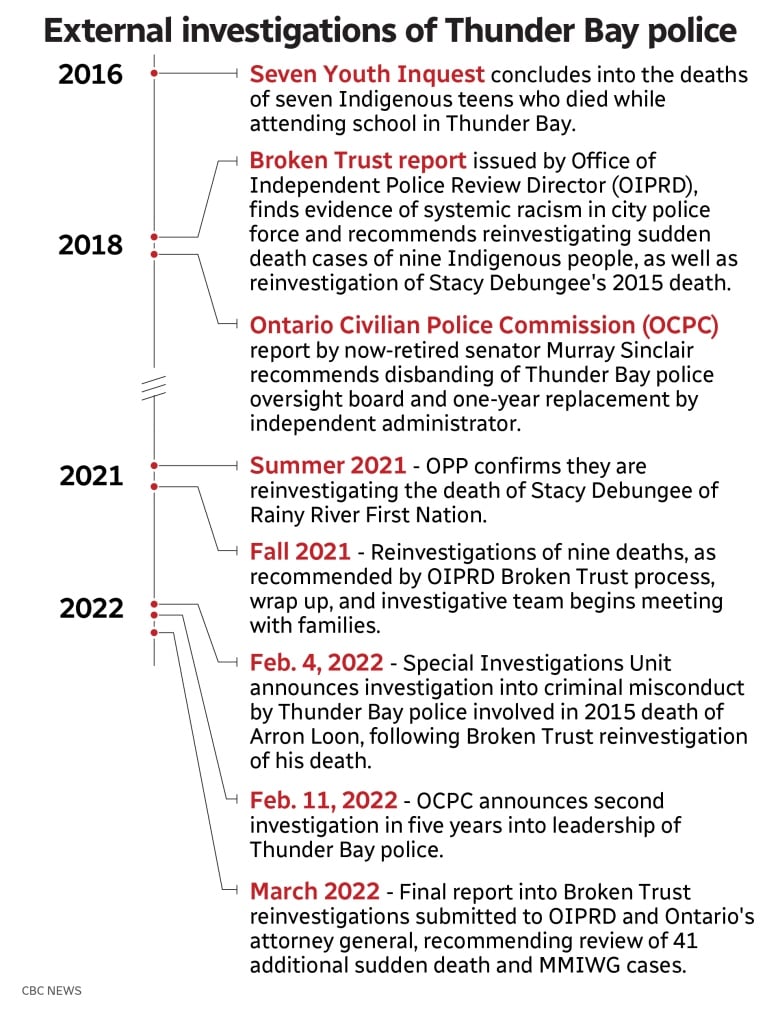 An investigative team that has been looking into sudden death cases in Thunder Bay, Ont., for years is recommending that police reinvestigate an additional 14, according to a confidential report leaked to CBC News.

The cases involve Indigenous people and date back to between 2006 and 2019. The youngest person was two months old and the oldest was 61.

The report is part of the final work of the Broken Trust committee, formed after the province’s oversight agency, the Office of the Independent Police Review Director, found evidence of systemic racism in the city’s police force in 2018.

The committee called for the reinvestigation of the sudden deaths of nine Indigenous people. Part of the process was to consider if other sudden death investigations undertaken by the Thunder Bay Police Service should be conducted again.

The leaked report, most recently updated in February, begins with a disclaimer that “due to finite timelines and resources allocated to the process outlined in this report, cases provided here are not an exhaustive list,” adding there may be other sudden death cases that “warrant further investigation.”

Brian Gray, a spokesperson with Ontario’s Ministry of the Attorney General, confirmed to CBC News that the ministry has received and is now considering the request to refer 16 sudden deaths for reinvestigation.

Those 16 include a coroner’s review for a missing person death and for a drug death.

In addition, there are 25 unresolved missing and murdered Indigenous women and girls (MMIWG) cases from Thunder Bay — some of which have remained open and have been unresolved for over two decades — that the report recommends be reviewed.

This is the latest development in a series of complaints and external investigations into the city’s police force over the past two months, and it comes as the original Broken Trust process begins to wind down.

In 2018, the Office of the Independent Police Review Director issued its Broken Trust report, which found evidence of systemic racism within the force. At the time, the office reviewed 37 sudden death investigations by Thunder Bay police and found nine of them to be “so problematic” that they should be re-conducted by a multidisciplinary investigative team.

Those original nine reinvestigations have been criticized by families and their lawyers for lacking transparency, but they have since concluded and the results are now being shared with family members, according to Ontario’s chief coroner.

The Broken Trust report also recommended the team establish a protocol to determine if other Thunder Bay police sudden death investigations should be redone.

CBC News has requested but has not yet received a copy of that protocol from Ontario’s chief coroner, who acts as a spokesperson for the executive governance committee overseeing the reinvestigations.

But as part of its work, the multidisciplinary investigative team conducted a non-exhaustive review of the police service’s and the provincial coroner’s records for sudden death and Indigenous death cases between 2000 and 2020. They included 229 cases.

The 16 cases recommended to be reinvestigated and reviewed range from what were initially determined to be apparent suicides or deaths ruled “accidental” under suspicious circumstances — including due to drownings, repeated falls or hypothermia — drug overdoses, and two shortly after the individual left or was discharged from the Thunder Bay hospital.

A CBC News analysis of the case reviews included in the report has identified several similar trends, including:

One of the key concerns that has emerged over the last decade of public scrutiny of Thunder Bay police and coroners is that they do not adequately communicate with families. That continues to be an issue, with a failure to update family members identified explicitly in three cases reviewed in the report.

In January 2017, Thunder Bay police created a sudden death review committee that was required to go over all sudden deaths to ensure all investigative steps were taken. But the leaked report says the police broke that new policy in three of the four sudden death cases reviewed since 2018.

CBC News has requested an interview with Thunder Bay police Chief Sylvie Hauth. Her spokesperson had not yet responded at time of this story’s publication.

While 14 of the cases in the report are recommended for police reinvestigation, the investigative team suggested two sudden deaths be sent to Ontario’s coroner for a review or an inquest, to create awareness and recommendations to improve public safety.

The report acknowledged Thunder Bay police have updated their missing person policies since 2016.

But it added “this case demonstrates the degree of vulnerability Indigenous peoples with mental health needs can face in Thunder Bay and the need for attention to be brought to missing persons cases of Indigenous peoples of all ages.”

The investigative team found considerable issues with the initial police response, including the passing of 20 days before a media release was issued and 30 days before a police ground search occurred.

The report presented a similar scenario to a staff sergeant with an Ontario Provincial Police emergency response team to review. That sergeant suggested OPP would have been able to find the person more quickly, the report states.

The lack of resources and strategies to properly investigate and curb these occurrences have become a significant threat to public safety.– Investigative team report

The other is a fatal drug overdose case in 2019. The report said that case is being raised, given the increasing number of drug-related sudden deaths in Thunder Bay and across the province, with Indigenous people at an increased risk in the city.

“The lack of resources and strategies to properly investigate and curb these occurrences have become a significant threat to public safety,” the report added.

The case summary included in the report says that when the coroner attended the scene, they immediately indicated it would be a coroner’s case and no foul play was suspected, and there “appeared to be no consideration by police or the coroner about seeking the source of the drugs and determining if Criminal Code charges, such as manslaughter or criminal negligence causing death, may be applicable after some investigation.”

But the case review adds there was evidence a woman and two other “persons of interest” were present when the victim died.

A background check by the investigative team confirmed the suspect was associated with an earlier drug-related homicide and two other overdoses. Yet the suspect wasn’t interviewed until two months later, and a number of other leads were never followed up, according to the report.

Ontario’s chief coroner, Dr. Dirk Huyer, told CBC News in an interview Tuesday that his office was awaiting any direction or recommendations by the provincial attorney general before taking action on the 16 sudden death cases.

Huyer previously confirmed to CBC News he would be ordering a new, independent systemic review of the Thunder Bay police death investigation process under the Coroner’s Act. That review would take all the materials gathered during the last several years of the Broken Trust process to offer their observations of how the process was conducted, and identify recommendations to create a pathway forward.

The chief coroner would not say who was on the Indigenous-led advisory circle guiding that work or who was included on the writing team, but said they include people with a wide range of expertise, including policing, death investigations, human rights and intergenerational trauma.

Their work began in February.