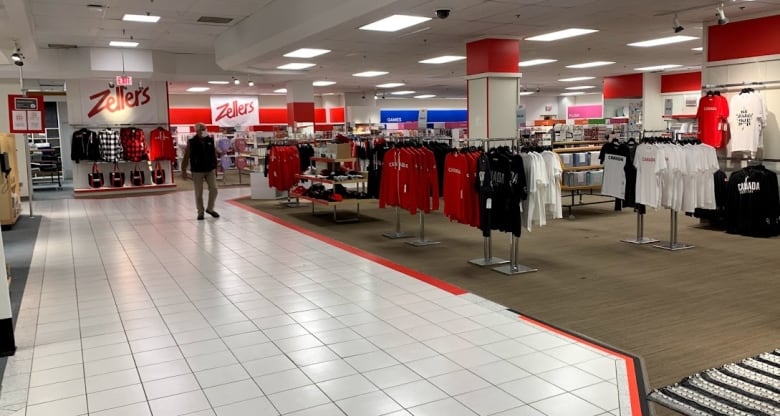 Shoppers at a Hudson’s Bay store in Burlington, Ont., might be surprised to see the typical black typeface of their familiar department store give way to bright red signage — equally familiar to most Canadians who shopped for anything from housewares to hardware from the 1970s onward.

The name and logo of Zellers hang from the rafters on the upper floor of the Burlington Centre Bay store, hidden in a corner near the toy section just past a broken escalator.

It’s not a standalone, full Zellers in the style of decades past. It’s a pop-up store inside an existing store rather than a full outlet of the discount department store that had hundreds of locations across Canada until the early 2000s.

The Zellers pop-up had only a few items for sale when visited by CBC Radio’s The Cost of Living in late September.

There were fewer than 20 clothing items for adults, mostly labelled “Canada” with red and white styles. There was a small selection of wine glasses, pillows and bedsheets, and several toys up for grabs.

It was a far cry from the broad selection in a full discount department store such as Walmart or Giant Tiger.

Customers used to the famous “law of low prices” that Zellers commercials referenced in jingle form may have been surprised at the pricing. The items at the pop-up discount brand were priced identically to nearby HBC stores, such as the Sherway Gardens Hudson’s Bay in suburban Toronto.

But while the lowest price was the law at Zellers in days gone by, the Hudson’s Bay Company said the point of this pop-up store is customers’ emotional response.

The new Zellers is “meant to delight our customers with a fun and nostalgic experience with one of HBC’s most beloved brands,” said Hudson’s Bay Company representative Tiffany Bourré in an emailed statement.

Trademark oddities some months before

The Zellers pop-up launched several months after the Hudson’s Bay Company trademark on the Zellers logo and design was “expunged” or removed from the federal government’s Canadian Trademarks Database.

Trademark expert and lawyer Julie MacDonell said this means the record no longer exists in the Registrar of Trademarks.

“Therefore you are not, from a registration standpoint, a recognized owner of that brand element, that name, logo, tagline,” said MacDonell.

Government records show the trademark office sent a renewal notice to HBC or its representatives for the trademark in December 2019. Months later, on Sept. 24, 2020, the trademark was “expunged” because of a “failure to renew.”

What happened next is unclear. Government records show a new application to register the Zellers name and logo design was filed in April 2021 by a “Zellers Inc.” based in La Trinité-Des-Monts, Que.

The new application to own the Zellers trademark does not appear to be affiliated with the Hudson’s Bay Company, despite the use of the name Zellers Inc.

In an emailed statement to CBC Radio, HBC confirmed it has nothing to do with the Quebec company, and said it remains the owner of all registered and unregistered rights to the Zellers mark.

“HBC is investigating the unauthorized use, or attempted use, of any Zellers trademarks and is prepared to take decisive action as necessary to avoid consumer confusion regarding our Zellers brand,” wrote HBC’s Bourré.

The Cost of Living was unable to contact the new applicant for the Zellers trademark at the address in question. Phone numbers associated with the address rang as out of service.

Another application for the rights to the name “Kmart” is also pending for a Kmart Canada Limited, based at the same address. Kmart Canada was purchased by the Hudson’s Bay Company in the late 1990s, with most stores converted to The Bay or Zellers at the time.

Trademark lawyer MacDonell theorized a new company could be trying to grab what it perceived as an abandoned logo or brand — but she cautioned this is unlikely to be a winning strategy.

“This is a brand that had substantial reputation, substantial profit associated with it and it just doesn’t work that you can go and grab that up and start a new business with it,” said MacDonell.

Both the new HBC application, and the unaffiliated “Zellers Inc.” application for trademark registration are in progress and have not been assigned to government examiners yet.

As for the store experience itself, the nostalgia HBC is looking for was felt by longtime Burlington resident N’gaire Lynn — at first.

She couldn’t hide the excitement in her Scottish brogue when telling CBC Radio’s The Cost of Living she phoned nearly half a dozen of her friends about the return of her favourite department store.

This is not Zellers. This is a second-hand part of The Bay. Sorry. Won’t wash with me.– N’gaire Lynn

Lynn was less excited once she got to the Zellers.

LISTEN | Hear from shoppers at the Zellers pop-up store:

Cost of Living4:27Is the lowest price the law again? Zellers returns as a pop-up store

“This is not Zellers. This is a second-hand part of The Bay. Sorry. Won’t wash with me,” she said while browsing through some mini food processors priced at $69.99 and plaid shirts priced at more than $50.

Nostalgia — and a potential marketing test

According to retail experts, HBC could be testing out whether Zellers still has legs as a brand.

Janice Rudkowski, an assistant professor at Ryerson University’s Ted Rogers School of Retail Management in Toronto, has researched pop-up retail and theorized HBC could be using the retail experience at the Burlington Centre mall to research what comes next.

“Perhaps it will give them some insights into how much investment they want to put into the Zellers brand in the future,” said Rudkowski, who added the company can gather information and data while the pop-up is running. The company has said future Zellers shops may be introduced at other locations.

Rudkowski also pointed out that Zellers still resonates with Canadians as a brand, so leveraging nostalgia could be on point, if not Club Z points.

“I’m sure a lot of people think back to their own childhoods and remember Zellers as being a really important part of that childhood so it taps into nostalgia, and that’s quite powerful,” said Rudkowski.

‘A lot of memories come back’

Customers walking through the Zellers section of the Bay in Burlington definitely described feeling nostalgic as they saw the familiar logo on the walls.

“You just kind of see the name and it pops and a lot of memories come back,” said Jennifer Morris, who was shopping along with Katie Bennink late on a Tuesday morning.

Both shoppers said they’d be unlikely to come back just because of those Zellers signs.

“It looks like the Bay with some Zellers signs in it,” said Bennink.

Listen to The Cost of Living on CBC Radio One, Sundays at 12 p.m. (12:30 NT) or download the podcast every Friday night.