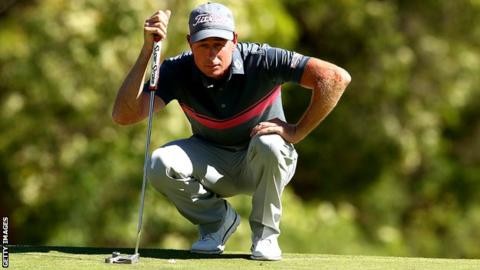 Overnight leader Mark Foster slipped back to a share of 26th place with a second-round 73 at the inaugural World Super 6 in Perth, Australia.

The Englishman had made seven birdies in his opening round but could manage only one in round two, with two bogeys leaving him on five under par.

Australia’s Brett Rumford improved on his opening 66 with a 65 to lead on 13 under par.

Scotland’s Duncan Stewart moved up to 10th with seven birdies in a 65.

The event in Perth involves three strokeplay rounds and two cuts, before the top 24 contest a six-hole knockout match play on Sunday.

The top eight players will get a bye through to the last-16 of the match play finale.

“For any players, that’s why it’s going to be so unique and so interesting as well,” Rumford told the European Tour.

“There’s sort of cuts within cuts this week and if you’re not thinking about it, maybe it’s a good thing, maybe a bad thing, I’m not too sure, but definitely the top eight is where you want to be.”