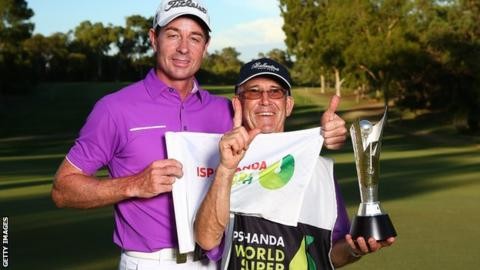 Rumford, 39, was top of the leaderboard for all three strokeplay rounds and had a bye into round two for Sunday’s six-hole knockout matchplay format.

He saw off Hideto Tanihara, Wade Ormsby and Adam Bland to reach the final, where a fine finish gave him a 2&1 win.

Khongwatmai finished nine shots behind Rumford after the three strokeplay rounds and was in the highest-scoring group of the 24 players to qualify for the matchplay rounds.

He had to play one round more than Rumford and saw off Australians Sam Brazel, Lucas Herbert and Matthew Millar to reach the semi-finals, where he easily overcame Scrivener 3&1.

Rumford won the opening hole in the final at Lake Karrinyup, only for his teenage opponent to level at the next following a wayward drive from the Australian.

At the fourth hole, Rumford was in a perilous spot in sandy soil under trees to the left of the green but played a deft escape over a bunker and holed from 12 feet for a birdie four.

Then at the next he pitched to two feet at the par three and Khongwatmai conceded after taking two to escape from a bunker.

It was a sixth European Tour title for world number 274 Rumford, who had gone 80 events since his last win at the China Open in 2013, and it enabled him to regain full playing rights on the Tour.

“It really comes down to the people,” he said of the new event, one of a series of innovations aimed at attracting new followers to golf. “If it’s going to grow the game and it becomes an event with a bit more excitement and thrill about it then as a tour we’ve done a great job.