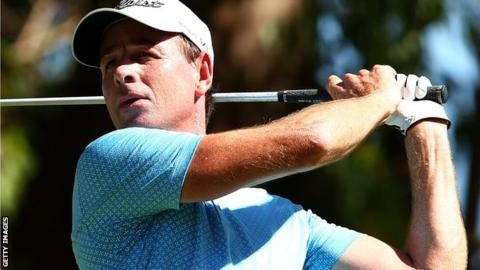 Australian Brett Rumford was top of the third-round leaderboard in Perth at the inaugural World Super 6, which becomes a matchplay event for the final day.

World number 274 Rumford, who has been top in each round, shot a four-under 68 to finish five clear at 17 under.

The leading 24 players progressed to the final day on Sunday and the top eight earned a bye into the last-16 round of the matchplay format.

Australia’s Jake Higginbottom took the final seeded spot on count back as his 66 was the best round from the six players who finished on 11 under.

A total of 19 players, who were nine under or better, secured their places for the matchplay finale, leaving the eight golfers a shot further back to play off in two groups at the 18th hole for the five remaining available spots.

Four went through with pars at the first time of asking. Wiltshire’s Jordan Smith, the 24-year-old in his maiden season on the European Tour, missed out at the first extra hole and 17-year-old Phachara Khongwatmai of Thailand claimed the 24th and final place with a par when the 18th was played for a third time.

Sunday’s matches will be six-hole contests played over the 10th, second, eighth, 11th, 12th and 18th, a mixture of three par-fours, plus two par-threes and a par-five.

Should a match not produce a winner after six holes, a specially constructed 93-yard ‘knockout hole’ to the 18th green will be used for a sudden death play-off.

Oosthuizen, the world number 25, has dropped just one shot in 54 holes and said: “The goal was to make the top eight so I’m happy.

“In the matchplay I’ll need to be a little bit more aggressive, play more towards the pin and see if I can get them really close and try and hit the putts a little firmer to get them there.”