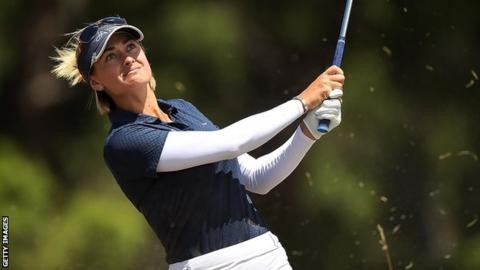 Wales’ Amy Boulden is five shots off the lead despite a superb finish in the penultimate round of the Women’s Australian Open in Adelaide.

The 23-year-old was five over with six holes to play but followed that with two birdies and holed out from a bunker to eagle the 17th and reach five under.

England’s Charley Hull mixed five bogeys with three birdies for a two-over-par 75 and is 12 adrift.

American Lizette Salas leads the way after three birdies in her last five.

World number one Lydia Ko, who dropped six shots in round two at the Royal Adelaide course, is 10 behind Salas at level par.

Thailand’s Ariya Jutanugarn, the LPGA’s Player of the Year and a five-time winner in 2016, shot a 71 and is four under.

American Michelle Wie shot 76 and is eight strokes off the lead, with compatriot Cheyenne Woods – Tiger’s niece – one further back after five birdies, three bogeys and a double bogey for a level-par 73.

Scotland’s Gemma Dryburgh and Michele Thomson, who began the day four under par, plummeted down the leaderboard after rounds of 80 and 81 respectively.