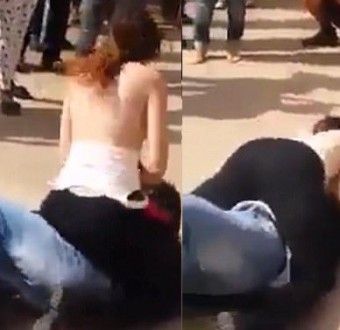 This is the bizarre moment a woman humiliated a ‘sex pest’ in front of a crowd with an outrageous display.

In the video, the irate woman pinned down a ‘sex pest’ in the street, stripped off and rubbed her breasts on his face while the alleged assailant pleads for her to stop, claiming he ‘was out shopping with his wife and has done nothing wrong.’

The footage shot in Ribeirao Preto city centre, south-east Brazil, is an anti-sexual harassment stunt by the Confluências group.

According to the group, they wanted to highlight the unwelcome attention that can often turn into sexually explicit and degrading comments, coupled with intimidating approaches to women working in public places.

Fausto Ribeiro, director of the Confluências group, the creators of the piece said: ‘We wanted to expose and address something that happens every day to our sisters and female friends.
‘This was meant to challenge people’s perceptions and empower women with the shock tactic of retaliation. We wanted to force men to think more responsibly about their actions and the consequences.’