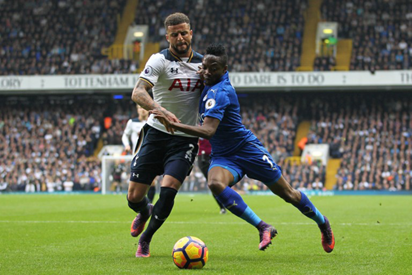 English Premier League champions, Leicester are in a fight to avoid relegation, and striker Ahmed Musa has called on his team-mates not to allow their recent failures stop their campaign.

At the weekend Leicester City were knocked out of the FA Cup by a 10-man Millwall to compound their woes. They are yet to win a match in 2017 with a point just above the relegation zone, even as they aim for a place in the Champions League last eight with a clash against Seville on Wednesday. Musa is optimistic the club can overcome their unlucky spell.

“We are so upset, but there is nothing we can do now,” said Musa. “We have to concentrate on the next game.

“Everyone was sad. The manager was not happy. We cannot go back and play again, so we have to focus on the games that are coming.

“Confidence is a little low after a loss because we didn’t deserve to lose.”

Musa argued that Leicester were unlucky in their last game.

“Everyone in the team was so angry and so upset,” said Musa. “We had the confidence that we were going to win and we played very well, but they had just the one chance and they scored.

“It was a very difficult game for us. Everyone, the manager, the boys are so upset in the dressing room.

“We were unlucky. In the first half, we could have scored three. But that is football.”

Leicester will visit Liverpool February 27 in another EPL cracker.