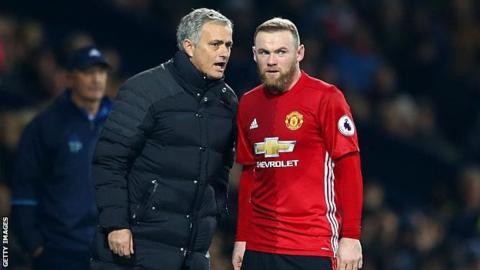 Manchester United boss Jose Mourinho has not ruled out the prospect of Wayne Rooney leaving the club this month.

The 31-year-old England forward, who scored his 250th United goal last month to become the club’s record scorer, has been linked with a move to China in recent weeks.

The Chinese Super League’s transfer window shuts next week and Mourinho was asked if the club captain would still be at Old Trafford by then.

“You have to ask him,” Mourinho said.

Rooney is contracted to United until 2019 and had previously said he was committed to seeing out his deal.

He has not been a first-team regular this season and has scored just five goals.

However, Mourinho said in October that Rooney was “going nowhere” and reiterated on Tuesday that he did not want him to leave.

“I would never push – or try to push – a legend of this club to another destiny,” added the Portuguese coach.

“It is not a question for me because I am happy to have him. I don’t want him to leave.”

Meanwhile, Rooney’s team-mate Anthony Martial insists he wants to stay at the club “for as long as possible”.

The 21-year-old has struggled to recapture the form shown during his debut season at Old Trafford and was linked with a loan move to Sevilla in December.

“I love Manchester, I love the club and I love the fans,” Martial said.

“The fans give me a lot of joy and I really enjoy having them backing me. I try to be as good as possible to make them happy, to satisfy them.”