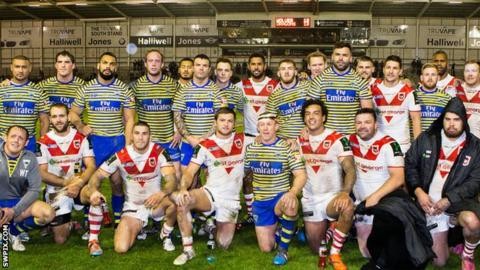 Warrington head coach Tony Smith is hopeful they can show Super League’s quality when they face Brisbane Broncos in the World Club Series.

Since the introduction of the new format, NRL teams have won all six fixtures between the two competitions.

Leeds were the last team to beat a side from the southern hemisphere in 2012.

“Now that I’ve been here so long, I think there isn’t a whole lot of credit, in some quarters, given to the Super League,” said 50-year-old Smith.

He told BBC Radio Merseyside: “I think the opportunity for us to represent Super League and put a good foot forward is a real incentive.

“I also get the rivalry between the English and the Australians in terms of sport and that comes into play.

“We’ve only got two Aussies in our squad and I’m sure they’d love to win and get one over their native country.”

Brisbane, coached by England boss Wayne Bennett, have been involved in the competition in 2015 and 2016 when they beat Wigan on both occasions.

Melbourne Storm pulled out of the chance to feature in 2017 to focus on their pre-season preparations, meaning there is just one other fixture – Wigan against Cronulla Sharks on Sunday.

“It is at a crossroads with where this competition could go,” added former Great Britain coach Smith.

“We’ve certainly had a strong desire to be part of it and we want to show we can do it as well.

“A club doesn’t get to play against touring teams anymore, this is it. This is something for some generations to remember for years and years to come.”