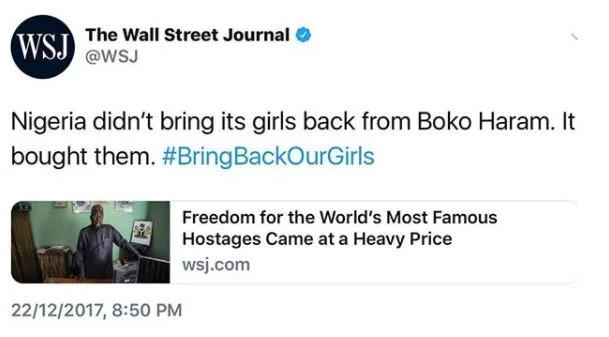 According to Wall Street Journal, the Federal Government paid €3 million for the release of some Chibok schoolgirls who were in Boko Haram custody,

In 2014, Boko Haram insurgents had kidnapped 276 girls from Government Girls Secondary School, Chibok in Borno state. Of the 276, 163 are now free: 57 fled in the early days after their abduction, three escaped later, and a Swiss-coached mediation secured 103.

21 of the 103 were freed on October 13, 2016, while the remaining 82 were freed on May 6 this year. In a detailed report on the incident, WSJ said while €1 million was paid for the 21 first freed, additional €2 million accompanied the five Boko Haram commanders that were exchanged with the next batch: the 82 girls.