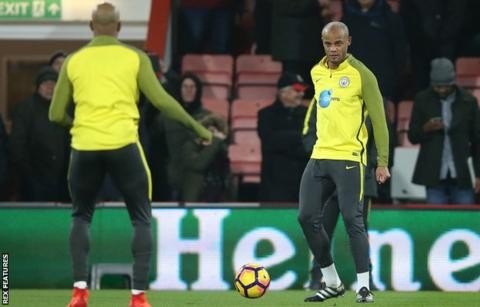 Captain Kompany was expected to be involved in the goalless draw, but pulled out because of a leg problem.

The 30-year-old Belgian has been dogged by groin and calf injuries and has played only 341 minutes of football this season.

“Kompany was not able to play today but it is not a big issue,” said Guardiola.

The centre-back played the full 90 minutes in the previous round against Crystal Palace in January, but has not appeared since and was in line to make his comeback against the Terriers in West Yorkshire.

But Kompany failed to add to his six appearances this season and no timescale was given by Guardiola on when he will return to action.

Meanwhile, the Spaniard refused to comment on suggestions defender Bacary Sagna and winger Raheem Sterling had a plastic bottle thrown at them.

The pair, who were both substitutes for the match, were warming up to the left of the dug-outs at the John Smith’s Stadium when a bottle landed close to them.

Is Aguero’s time at Man City coming to an end?

Sergio Aguero started for Manchester City, having spent the last four games on the bench. However Gabriel Jesus, who had replaced him in the team, could miss the rest of the season with a foot injury.

Former City winger Trevor Sinclair said on Match of the Day: “If he scores goals, then he fits anybody’s style of play. Fans are fearing he might go.

“We all remember the goal against QPR in May 2012 to win the Premier League title but I feel his time is finished with City. He does not fit the protocol for City’s play, which is a lot of mobility, a high press and that does not suit him.”