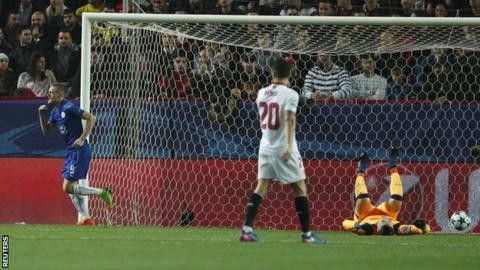 Jamie Vardy broke his recent goal-drought to give Leicester an away goal and keep alive their hopes of reaching the last eight of the Champions League despite a narrow first-leg defeat away to Sevilla.

The England international had gone nine games without scoring and was a peripheral figure for much of Wednesday’s game but sprang into life to finish Danny Drinkwater’s superb cross with 17 minutes remaining in Spain.

It was one of only two shots on target the Foxes produced during a game in which they were largely under the cosh and had trailed 2-0 in thanks to Pablo Sarabia’s header and a close-range finish from Joaquin Correa for Sevilla.

City’s other hero was Kasper Schmeichel, who saved a Correa penalty with the score at 0-0 and made a number of other good saves.

Sevilla also hit the post and bar had over 70% possession but will only take a slender lead to the King Power Stadium for the second leg on 14 March.

Amidst Leicester’s dire domestic form, which has seen them lose 14 league games already, including their last five, and exit the FA Cup at the hands of League One Millwall, their Champions League displays have acted as timely reminders of last season’s stunning Premier League title success.

And there will have been none more timely than this.

Prior to the game, manager Claudio Ranieri suggested a positive display could act as a turning point for their season, and while they were outclassed for long periods, the rediscovery of a stubbornness and spirit could prove crucial not just for this tie but the rest of the campaign.

The tie looked to be over after Correa’s calm close-range finish in the second half had doubled the lead given to the home side by Sarabia’s powerful, pinpoint header before the break.

But with less than a quarter of the game to go, Drinkwater produced Leicester’s one incisive attacking ball of the night to find Vardy, whose run into space behind his marker and first-time finish bore all the instinctual qualities he showed so often last season.

Vardy and Schmeichel the saviours?

Vardy’s goal not only keeps the tie alive but offers hope to Leicester that he can return to form and fire them to Premier League safety.

His goal-drought, following the hat-trick against Manchester City on 10 December, coincided with a nine-game winless streak for the Foxes that has left them just a point and a place above the relegation zone.

The 30-year-old managed just 25 touches in total on Wednesday, but he made the one that mattered – his only shot on goal – count.

Jorge Sampaoli’s Sevilla side justified their position as La Liga title challengers with a dominant display that lacked only a goal-tally to match.

Schmeichel can take much of the credit for that and following his penalty save, he showed superb awareness and reflexes to tip away shots from Sergio Escudero and Correa.

City were also indebted to the woodwork, with the post denying Vitolo from a tight angle and the bar halting Adil Rami’s late header.

‘Every result is still open’

Leicester manager Claudio Ranieri: “We knew they are better than us, they have high quality in possession. We suffered. They showed their quality but we showed our heart. We showed belief and never game up. That makes me satisfied.

“Kasper Schmeichel and everybody had a good game. Kasper saved the penalty and gave lot of support to his defenders.

“For us, it is important to continue to show our performance and our football.”

Leicester host Liverpool next Monday and then Hull the following Saturday in the Premier League before the return leg against Sevilla.