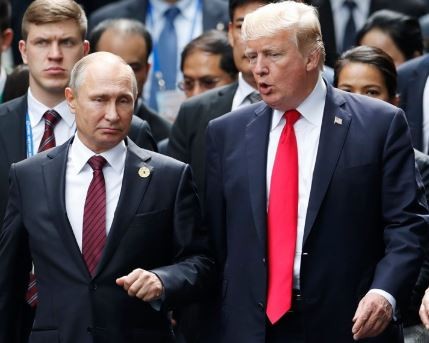 U.S. lawmakers describe President Trump and Putins summit in Helsinki as a ‘show of treason’

U.S. lawmakers called out President Donald Trump yesterday over his uncritical comments towards Russia during a landmark summit with Vladimir Putin, calling it “shameful”, “dangerous” and “verging on treason.”

Trump’s answer to a question on election interference, in which he attacked US Democrats rather than Moscow’s spies, “will be seen by Russia as a sign of weakness and create far more problems than it solves,” Graham charged.

Senator Jeff Flake, a fellow Republican and staunch critic of the president, labelled his performance “shameful. I never thought I would see the day when our American President would stand on the stage with the Russian President and place blame on the United States for Russian aggression. This is shameful,” he said in a tweet.

Representative Frank LoBiondo, a Republican on the House Intelligence Committee, which is investigating Russian election meddling, noted that just on Friday US prosecutors indicted 12 Russian spies for hacking Democratic computers during the election. “It is clear Russia’s intentions,” he said. “President Trump missed opportunity to hold Putin publicly accountable.”

Democrats had stronger words for the president.

Chuck Schumer, the senior Democrat in the Senate called Trump’s appearance of siding with Putin over the allegations of election interference “dangerous and weak”.

“In the entire history of our country, Americans have never seen a president of the United States support an American adversary the way @realDonaldTrump has supported President Putin. For the president of the United States to side with President Putin against American law enforcement, American defence officials, and American intelligence agencies is thoughtless, dangerous, and weak. The president is putting himself over our country,” Schumer charged.

Democratic California Representative Jimmy Gomez accused Trump of continuing to “sell out” his own country to Russia.

“To side with Putin over U.S. intelligence is disgusting; to fail to defend the U.S. is on the verge of treason. All Americans should be worried.”

Congressman Adam Schiff, the senior Democrat on the House Intelligence Committee, said Trump had given Putin “a green light to interfere in 2018.”

Democratic Senator Chris Murphy was even more direct in his criticism.

“This entire trip has just been one giant middle finger from President Trump to his own country. Just jaw dropping,” he wrote on Twitter.

“Donald Trump’s press conference performance in Helsinki rises to & exceeds the threshold of ‘high crimes & misdemeanors.’ It was nothing short of treasonous,” said John Brennan, director of the Central Intelligence Agency from 2013 to 2017.

“It is truly unbelievable. On the world stage… the president of the United States essentially capitulated and seemed intimidated by Vladimir Putin,” Clapper said.