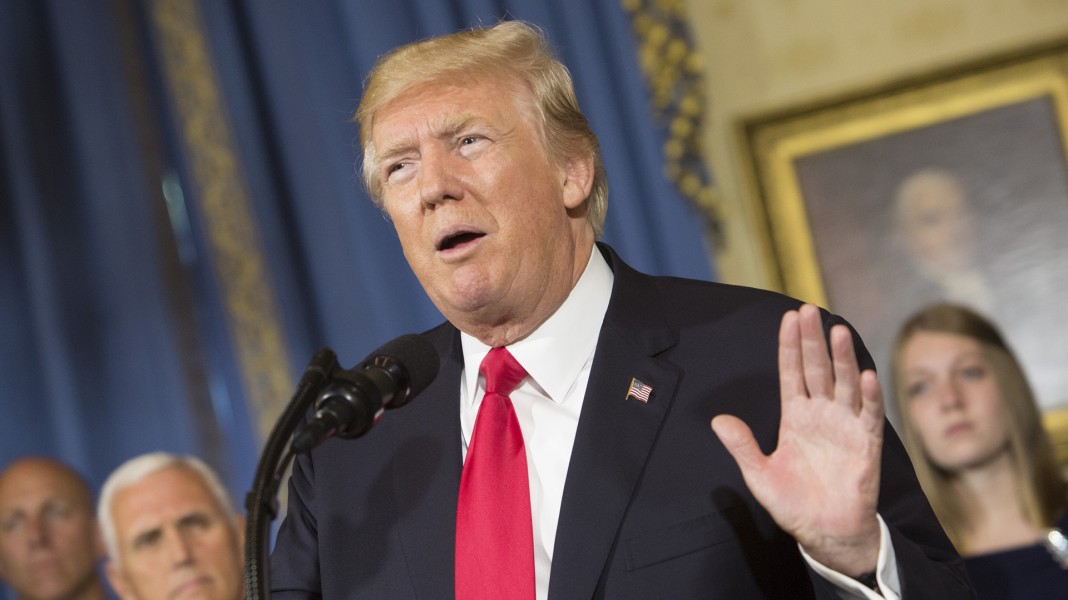 President Trump used his harshest language yet to warn North Korea on Tuesday that it will be “met with fire and fury and frankly power, the likes of which this world has never seen before” if it does not stop threatening the United States.

“North Korea best not make any more threats,” Trump told reporters at his Bedminster, N.J., golf club, where he is vacationing. Saying that the threats had gone “beyond a normal state,” he twice repeated the “fire and fury” warning.

It was not immediately clear what Trump was responding to. A North Korean military spokesman said Tuesday that Pyongyang was considering a plan to fire missiles at Guam, and that it would carry out a preemptive strike if there were any signs of U.S. provocation, Reuters reported, quoting state media.

Earlier in the day, North Korea said it would “ruthlessly take strategic measures involving physical actions,” in the wake of new economic sanctions approved by the U.N. Security Council on Saturday. On Monday, Pyongyang threatened retaliation against the United States “thousands of times.”

Trump’s statement also followed a report in The Washington Post that North Korea has successfully produced a miniaturized nuclear warhead that can fit inside its ballistic missiles, crossing a key threshold on the path to becoming a full-fledged nuclear power. The report quoted a confidential assessment by U.S. intelligence officials.

The escalated rhetoric and talk of war came as the administration is trying to push North Korea toward direct talks that, despite its earlier pushes for such a dialogue, Pyongyang now shows no sign of wanting.

“The strategy has been pretty clear, ” said a senior administration official, who spoke on the condition of anonymity to discuss internal policymaking, “to increase economic pressure and diplomatic isolation, with the goal of getting the North Koreans to come to their senses and begin reducing the threat, so that we can have a meaningful dialogue.”

“Right now, there is nothing that North Korea is doing that suggests to us that they are willing to have a serious dialogue with us,” the official said.

Even if Pyongyang expressed interest, the administration has been intentionally ambiguous about what it would consider a sufficient change by North Korea. In comments at a weekend security conference in Manila, Secretary of State Rex Tillerson said that at a minimum, North Korea must stop its ballistic missile tests. “That would be the first and strongest signal,” Tillerson said. “We have not had extended periods of time where they were not taking some type of provocative action by launching ballistic missiles.”

The administration has made clear that it is no longer adhering to the policy of previous administrations requiring North Korea to commit to giving up its nuclear weapons before talks can begin. While denuclearization of the Korean Peninsula is the ultimate goal, it is no longer a U.S. prerequisite for talks.

Repeating comments he made in the spring, Tillerson last week said the United States is not seeking regime change in North Korea.

If Tillerson’s remarks were the carrot, Trump’s are clearly the stick.

The White House has said it is “keeping all options on the table” regarding North Korea, including the use of military force. “There is a military option to destroy North Korea’s [nuclear] program and North Korea itself,” Sen. Lindsey O. Graham (R-S.C.) told NBC last week, saying that Trump had told him of the plans “to my face.”

In apparent reference to a preemptive U.S. strike, Graham said Trump told him that “if there’s going to be a war to stop [Korean leader Kim Jon Un], it will be over there. If thousands die, they’re going to die over there. They’re not going to die here.”

Short of war, the administration is already drawing up plans for additional sanctions, including on North Korean oil imports. “We’re still far short of the kind of pressure that we brought to bear against Iran, or even Iraq” under Saddam Hussein, the senior official said.

It remains unclear whether China, which agreed to vote for last weekend’s sanctions resolution after lengthy negotiations with the United States, would agree. Up to 90 percent of North Korea’s economic activity is conducted with China. For now, officials said, the administration is concentrating on making sure other countries comply with the newly enacted measures.

Victor Cha, director of Asian studies at Georgetown University and former president George W. Bush’s top adviser on North Korea, said he took Trump’s harsh statement “not to be a sign that the United States is going to attack, but [to warn that] if North Korea actually did anything behind all their bluster, they would be met with immediate and overwhelming response. That is actually good for deterrence.”

But at the same time, Cha said, it was unclear whether Trump’s outburst was coordinated with Tillerson’s outreach. In any case, he said, the situation is “definitely going to heat up” in the next several weeks as the United States and South Korea begin regularly scheduled military exercises in August. “I expect we’ll see a bunch of fireworks during that period,” he said.

Trump’s late afternoon statement Tuesday came after he took to Twitter in the morning to amplify a Fox News report, based on anonymous sources, that U.S. spy satellites had detected North Korea loading two cruise missiles on a patrol boat on the country’s coast in recent days.

Without adding any comment of his own, Trump, who regularly decries leaks to the media, retweeted to his more than 35 million followers a link to the day-old story, which was featured Tuesday morning on “Fox & Friends,” a program on Fox News .

A White House spokesman did not respond to a question about whether Trump’s retweet amounted to a confirmation of the story, which was attributed to unnamed “U.S. officials with knowledge of the latest intelligence in the region.”

One intelligence official asked about the report said it was insignificant and not a sign that North Korea was preparing to test a ballistic missile or make any other provocation. But the official, who was not authorized to speak publicly, expressed chagrin that Trump would retweet a report about “something unimportant” that nonetheless “reveals something about our surveillance capabilities.”

[N. Korea says it won’t give up nuclear weapons]

Trump, who receives daily intelligence briefings, including while on his current 17-day stay in New Jersey, would presumably be in a position to know whether U.S. intelligence believes that the North Koreans did, in fact, load cruise missiles onto a patrol boat recently, and its significance.

Asked about the report Tuesday morning on Fox, Nikki Haley, the U.S. ambassador to the United Nations, said she could not comment.

“I can’t talk about anything that’s classified, and if it’s in the newspaper, that’s a shame,” Haley said. “It’s incredibly dangerous when things go out to the press like that.”

Since taking office, Trump has increasingly spoken out against leaks of sensitive information by members of his administration, some of it damaging to the president himself. He recently urged Attorney General Jeff Sessions to take a far more aggressive posture toward rooting out leakers.

Ellen Nakashima contributed to this report.