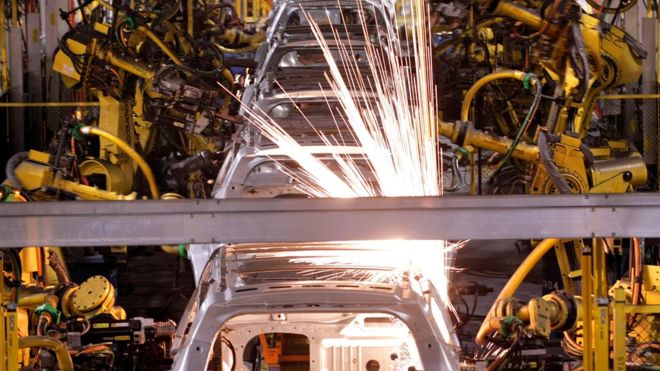 The US car industry will be wrecked if President Trump relaxes emissions standards, California’s governor says.

He said huge investment was needed on electric vehicles, along with federal rules to encourage their purchase.

He said President Trump and US car-makers were “half asleep” and hadn’t understood the scale of the challenge.

He told BBC Radio 4’s Costing the Earth: “There will be a serious threat to the US auto industry.

“The Chinese have taken over the world in wind turbine production, and photovoltaic.

“They’re going to take over the American car industry – and the people in Detroit are half asleep. They have to wake up – and I’m hoping they will.

“China’s investing billions in battery technology and electric cars – and introducing a regulatory regime that will produce for their market a percentage of electric cars that to my knowledge no American executive can even imagine.”

Mr Brown said he believed the electric car had a good prospect of being “very competitive” with petrol and diesel cars within five years.

California has special powers as a state to set its own car standards but Mr Brown believes federal action is essential to create a big enough market.

“Boy, it’s a very tall mountain we have to climb. To make it work needs a federal tax and regulatory regime.

“But that we don’t have and won’t have until Mr Trump returns to his hotel business.”

Mr Brown is leading a group of 15 states refusing to follow Mr Trump’s attempt to lower CO2 standards for vehicles and electricity.

“We can pursue an intelligent, forceful climate agenda without jeopardising jobs and damaging our economy – which is the message of Trump,” he said.

“We’re in a contest of ideas, actions and policies. The outcome of this contest will determine what the world’s going to look like in the next 10-20 years.

“We have to rise to the occasion.”

California’s critics say the state has talked a good game on clean vehicles but on its sprawling highways, electric cars are still a rare sight.

The governor admitted its electric vehicle programme is “nowhere near what it needs to be”.

He said it was ironic that US car-makers previously driven to the verge of bankruptcy by fuel-efficient imported vehicles were once again campaigning against higher efficiency standards.

“We are looking for ways to up the ante against automobile companies who want to do less rather than more,” he said.

“Maybe our biggest ally is the People’s Republic of China, which is going to demand a zero vehicles initiative that would align very closely with California.

‘With US car makers we are looking at the inertia of a complacent culture than enjoys the present and is unaware of the danger in the future.”

“The global alliance on climate is growing stronger. We are carving our own path forward.

“Trump won’t be a permanent phenomenon. We are holding the torch pending this sorry interim of environmental ignorance.”

The Trump administration declined to be interviewed on Mr Brown’s comments.

His supporters would point out that he is simply following through policies promised before the election to lower pollution standards, safeguard coal and withdraw from international agreements.

In the absence of a major political figure from the administration, Mr Brown will be the senior US politician at the UN climate talks in Bonn, where delegates are drawing up a rule book for implementing the Paris climate accord.

The US delegation is led by career diplomats who have accepted the seriousness of the climate threat.

But President Trump has infuriated other delegates by taking a delegation from Peabody Coal to trumpet the virtues of clean coal in tackling climate change.