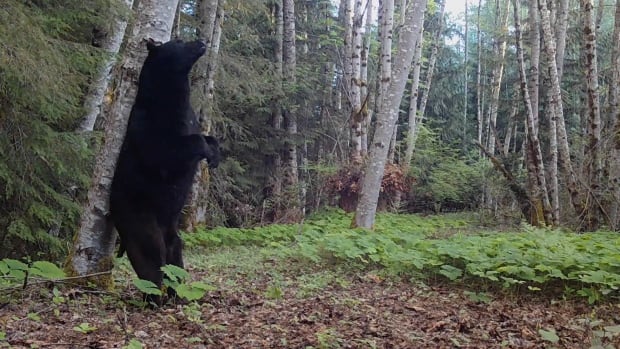 Five trail cameras set up along an inactive logging road outside of Courtenay, B.C., for a year show the biodiversity of even the smallest green spaces in the province, according to the creators of a series by the Hakai Institute, a research and conservation organization.

The five videos that make up Field Notes released over the fall on YouTube capture several species, from black bears rubbing their backs on trees to mark territory to martens playing on a beaver dam, to both deer and their predator, cougars, visiting the same areas hours apart.

Bennett Whitnell, who produced the series with Grant Callegari, said its genesis was simply to capture black bears rubbing themselves on trees, a way for the animals to place their scent in a territory in order to communicate with other bears in the Morrison Creek watershed.

But soon after setting up cameras in an area close to Cumberland or Courtenay, they realized there was far more wildlife in the area than people had seen before.

“It was just kind of mind-blowing what kind of animals were coming through along with some recurring personalities and also new characters throughout the season,” said Whitnell.

The project is the latest in a growing trend of using digital, motion-sensor and infrared cameras attached to trees or in other static locations for long periods of time to allow for a window into the natural world without the disruption of the presence of humans.

Cole Burton, an associate professor of wildlife biology in the faculty of forestry at UBC, is involved with several projects using trail cameras to monitor wildlife in their habitats to improve scientific knowledge and stewardship.

He says the technology has advanced to allow the capture of video and sound in wild areas, either day or night, and in harsh conditions.

“These cameras really give us that awareness of just how close we are with many of these animals and how important some of these spaces that we cherish for ourselves, how important they also are for wildlife.”

Nature documentaries are not new, with most people able to easily access highly produced programs showing dramatic action in the animal world on streaming services.

What sets offerings such as Field Notes apart, however, is its slow pace of showing animals moving in and out of the frames of the cameras and generally going about their lives in the forest uninhibited — although some animals do investigate the cameras.

“It’s kind of like a hidden peek into the lives of the forest creatures that are always there, but we may not often see them,” said Josh Silberg, a science communications co-ordinator with the Hakai Institute.

The videos show some of the same bears, martens, deer and cougars as they search for food, interact with one another and change over the course of the year, such as fawns being born and losing their distinctive white spots as they grow.

One video even shows a mature buck pushing a doe during mating season in the fall with its head and vocalizing with a grunt — a rare sound and image to capture in the wild.

Another season of Field Notes is in the works and will focus on different habitats on Vancouver Island.

Meanwhile, both Burton and Whitnell hope residents will be inspired by projects like Field Notes to invest in their own cameras and put them up in their own green spaces to monitor wildlife.

“This forest is in such a small corner of B.C. and easily considered your backyard trail,” said Whitnell about Morrison Creek.

“There is so much wild going on in even close proximity to a city. I think it’s important to appreciate these small green spaces no matter where you are.”