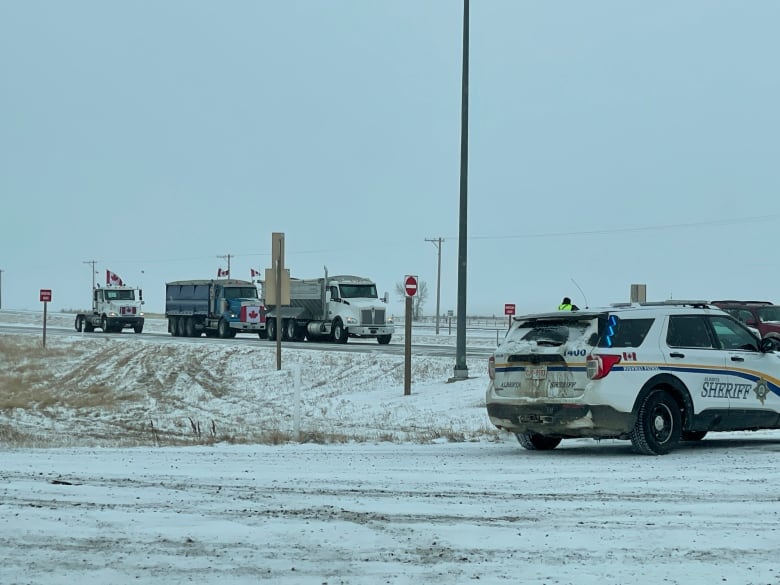 Protesters once again blocked Alberta’s southern land border Tuesday evening, shortly after an announcement from the premier in which he said the province will lift its public health restrictions — including its vaccine passport.

In a tweet, Alberta RCMP said the north and southbound lanes to the border crossing at Coutts, Alta., are now closed due to the blockade by protesters who have been demanding an end to vaccine mandates for cross-border truckers, as well as the lifting of a host of other public health restrictions related to COVID-19.

Please be advised the north and southbound lanes to the Coutts border crossing are now closed due to protester’s blockade.

RCMP spokesman Cpl. Curtis Peters said the border is being blocked by tractors, which moved in around 7:20 p.m. He said it is unlikely that the protestors will leave the area Tuesday night.

Earlier Tuesday, the province’s acting justice minister said the protesters could face jail time, depending on the charges RCMP choose to lay.

Sonya Savage told reporters Tuesday that charges are at the discretion of the RCMP to determine how laws will be enforced.

Though police are still trying to de-escalate the situation, Savage said Tuesday that the province is “looking at” the potential of a civil injunction and gathering information and evidence in preparation of one, but added that it was not necessary “at this point in time.”

She says the civil forfeiture act is also an option, which could involve seizing property.

“Those are pretty expensive vehicles that are on the side of the road, tractors and other equipment that could be seized and forfeited to the Crown,” Savage said.

‘There will be charges,’ RCMP deputy commissioner says

“We are investigating. There will be charges, and this does not end when the road is cleared,” he said.

“Our investigations began when the illegal activity began, and we will work with our investigative power using all of the tools we have available to ensure those who broke the laws are held accountable.”

Zablocki says he understands Albertans are frustrated the blockade hasn’t been forcefully ended.

“We are always cognizant, in particular in protests, especially when they’re illegal protests like this one is, of the potential for escalation, escalation of emotions, including the possibility of violence.”

He says in this case people are on the road because they feel they have a cause to bring forward, and the RCMP do not want to increase volatility in Alberta and elsewhere in Canada.

Zablocki says the removal of vehicles at the border requires special equipment. He noted that towing companies did not want to get involved when it was “implied” assistance would “damage their livelihood into the future.”

Irfan Sabir, NDP critic for justice, says he is shocked that after 11 days of an illegal blockade on a crucial economic corridor, no action has been taken.

“[Savage] has no answers for Albertans about why the UCP has allowed this lawlessness to continue,” Sabir said in a statement.

“The UCP still hasn’t applied to the courts for an injunction to clear the blockade. Savage describes the situation as unlawful and ‘intolerable’ but refuses to take even this basic step to give the law enforcement all the legal resources they need. She says an injunction is not needed at this time but she couldn’t be more wrong,” the statement read.

Marco Van Huigenbos, one of the protest organizers and a town councillor for Fort Macleod, Alta., told CBC News that the Monday night lane closure was a “show of force” that occurred after a supply of essentials, such as food and fuel, was disrupted.

After the lanes were reopened, RCMP spokesperson Fraser Logan told CBC News police agreed to let supporters bring food and gas to the protesters, provided those with supplies used secondary roads to get to the blockade, met Mounties at a checkpoint and left their vehicles and walked to reach the protest.

Trucks and other vehicles began parking on Highway 4 near Coutts late last month in solidarity with similar protests in Ottawa and across the country. They were protesting COVID-19 vaccine mandates for cross-border truck drivers and broader public health measures.

The Coutts blockade became two blockades when a second one appeared farther up the highway near Milk River last week.

The impasse stranded travellers and cross-border truckers for days, compromised millions of dollars in trade and impeded access to basic goods and medical services for area residents.

Last week, protesters agreed to open a single lane in each direction for traffic and so truckers could haul cargo across the border.

“The blockade, you know, affects southern Alberta and Alberta negatively … we understand that,” Van Huigenbos said. “So closing off the border, 100 per cent, all the time, is not something we want to do. It is something we are prepared to do.”

Also on Tuesday, the Town of Fort Macleod released a statement saying it had received complaints about Van Huigenbos’s involvement in the protest.

It said it is reviewing bylaw 1916, which established a code of conduct for the members of town council, “to ascertain the validity of those complaints and determine any further action that can be taken.”

Concerns raised over impact of closure

In a statement Tuesday, a spokesperson for Cargill, which operates a southern Alberta plant that processes about a third of Canada’s beef, said they are “monitoring the situation closely and are taking it day by day.”

“Currently, we are able to receive live cattle and are processing protein at close to our typical volume,” said Daniel Sullivan, adding the company is using its broad supply chain footprint to keep markets moving for producers.

A spokesperson for the Canadian Meat Council, which represents processors, said its members continue to use alternative routes to cross into the U.S. and are adjusting operations as needed.

Meanwhile, the federal government has agreed to send more RCMP officers to help manage the blockade.

On Tuesday, Public Safety and Emergency Preparedness Minister Marco Mendicino told CBC News that after speaking with Kenney, additional resources will be added to ensure that supply chains continue to move.