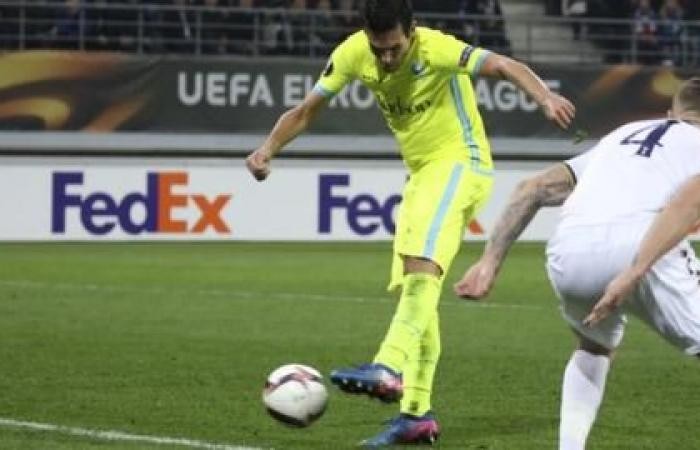 Tottenham’s Europa League hopes have been dealt a blow after Jeremy Perbet’s goal gave Gent a surprise victory in their last-32 first-leg meeting.

French striker Perbet controlled and slotted into the corner from Danijel Milicevic’s pull-back on the hour.

A strong Spurs line-up were poor for most of the evening, although Harry Kane clipped the post after half-time.

Gent, eighth in the Belgian league, almost added a second as Milicevic’s shot was tipped on to the post.

The second leg is at Wembley on Thursday, 23 February.

Gent’s 20,000-capacity stadium, the Ghelamco Arena, is host to a Michelin-starred restaurant, but there was little to feast on for Tottenham, who turned in a strangely listless performance.

Mauricio Pochettino had spoken before the match about how keen his players were to put behind them a poor display in losing 2-0 at Liverpool in the Premier League on Saturday.

With that in mind, Pochettino selected a very strong side – with only two changes to the team beaten at Anfield.

Dele Alli skimmed an early shot wide from just outside the penalty area after good build-up involving Harry Winks and Ben Davies, but that was as good as it got in the opening half.

Pochettino’s decision to move midfielder Moussa Sissoko out to the left at half-time led to a lively spell from the visitors, during which Kane clipped the post.

But Sissoko looked increasingly lost, and the Tottenham head coach was prompted into more tactical tweaks in an attempt to find an equaliser.

Nothing worked – and Tottenham’s frustration was summed up as Alli picked up a needless yellow card for dissent.

The Gent fans were singing “we’re going to Wembley” during the second half, in anticipation of next week’s second leg at England’s national stadium.

They may have more reason than Tottenham to look forward to their big night in north London.

Spurs stumbled at their temporary European home in this season’s Champions League – failing to qualify from their group after losing at home to Monaco and Bayer Leverkusen.

Having gone into the match in Belgium as second-favourites to win the Europa League, behind only Manchester United, Pochettino’s team now need a good Wembley performance just to stay in the competition.

The Spurs will be hoping that Kane is fit for that match, having picked up an injury in the second half. Pochettino indicated that the forward may not be risked when Spurs visit Fulham in the FA Cup on Sunday.

“We need to assess Harry Kane, he got a knock on his knee,” Pochettino said.

“We need to refresh the team. In the end, it is Tottenham that will play Fulham on Sunday, it’s not about the name of the player.”

Gent boss Hein Vanhaezebrouck – celebrating his 53rd birthday – caused something of a surprise with his team selection, making five changes and leaving his 15-goal top scorer Kalifa Coulibaly on the bench.

It suggested that Vanhaezebrouck was prioritising a top-six Belgian league place – and qualification for the domestic championship play-offs – above European progress.

Yet his decision to select the 32-year-old journeyman Perbet in attack paid off handsomely.

Even before Gent took the lead, the players selected were full of energy, pressing Tottenham into mistakes and enjoying plenty of possession.

They created decent openings; centre-back Samuel Gigot shanked an effort wide from the edge of the penalty area, while Toby Alderweireld had to block a shot from midfielder Kenny Saief, who made an adventurous run from the left after a poor Kyle Walker pass.

Better chances came after half-time, with Milicevic slicing wide as Spurs switched off at a throw-in moments before Perbet’s goal, and unmarked centre-back Stefan Mitrovic spurning an opportunity to make it 2-0 as he headed over from a corner.

“In the first half, they were the better of the two sides but after half-time we were better until the goal. It stopped us in our tracks. We could not get going again. They sat back and we could not get the away goal.

“When you go a goal down, you want to give everything to get back into the game. Maybe we were erratic at times and could have been a bit calmer and waited for our chance. That is something for us to work on.

“I don’t see why we cannot turn it around. This team gave everything against us, we did that but lacked a bit of quality. At home we will be better.”

Tottenham head coach Mauricio Pochettino told BT Sport: “I am disappointed yes because we had a lot of opportunities before we conceded, but the tie is open.

“It’s true that maybe it was not a good performance but we need to understand that it’s always difficult to play in the Europa League.

“We need to find a way to go to Wembley and win the game and go to the next round.”

Before next Thursday’s second leg at Wembley, Tottenham visit Fulham in the fifth round of the FA Cup on Sunday, when Gent travel to fellow mid-table side Standard Liege in the Belgian league.