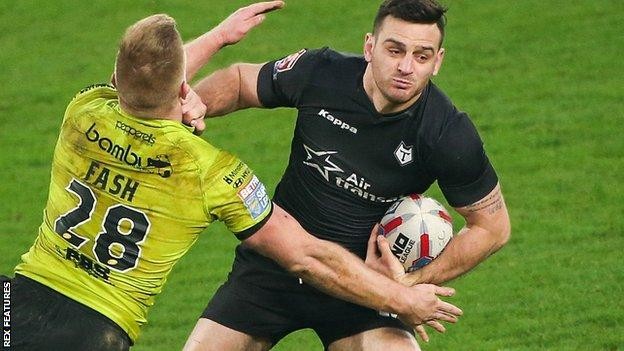 Toronto Wolfpack will become the first transatlantic sports team when they take on Siddal in rugby league’s Challenge Cup on Saturday.

Nine years in the making, the Wolfpack will compete in their first professional game against the West Yorkshire side in round three of the cup competition.

The Canadian club start this season in the third tier of English rugby league, but they have high ambitions – to reach the Super League within five years.

With the world of rugby league eager to see what the Canadian side are made of, BBC Sport uncovers how they came to play in England and what fans can expect.

Who are Toronto Wolfpack?

The man behind the team is Eric Perez, who has worked in PR and broadcasting. He’s a born and bred Torontonian who first came across rugby league when he was living with his girlfriend in Gibraltar and saw a match on TV.

Nine years ago he was living in Birmingham and started to regularly watch the Super League. He says he was blown away by the sport, describing it as the most Canadian sport not played in Canada.

He decided to make it his lifetime goal to set up a side in his home city of Toronto.

Their head coach is the highly rated Paul Rowley, a former England international and ex-coach of Leigh, while director of rugby is former Great Britain, Bradford and Wigan coach Brian Noble.

How have they joined the English leagues?

For the past nine years Perez has been working behind the scenes to convince the Rugby Football League (RFL) and other clubs that this was no pipe dream.

He’s worked closely with Gary Hetherington, chief executive of Super League side Leeds Rhinos, to learn how to run a club.

Perez gathered together financial backers and sponsors and secured the 10,000-seater Lamport Stadium in Toronto. He’s also sold the broadcast rights for TV stations to cover the Wolfpack across Canada and the UK.

He created a Canadian national rugby league side using players from a league he set up, and got a crowd of more than 8,000 to watch their opening game against a visiting Royal Air Force team.

All that work convinced the RFL that they should be allowed into the league. When a vote was put to the English clubs they gave their backing with an overwhelming majority in favour.

And with nearly 3,000 season passes having already been sold before a tackle has been made, Perez is confident the Wolfpack will play in front of sell-out crowds on home soil.

Who will play for them?

The majority of players are drawn from England and the Wolfpack have assembled quite a squad. Their captain Craig Hall, a former Hull FC and Hull KR centre, was still playing in Super League for Wakefield Trinity last year. And Trinity wanted to keep him.

Their most charismatic signing is Tonga pro Fuifui Moimoi, who played for Parramatta Eels in Australia, before spending last season at Super League side Leigh Centurions.

Most expect the Wolfpack to romp through League 1 this year and be a real challenger in the Championship next year as they bid for promotion to the Super League.

They’ve also run trials in several Canadian and US cities to identify youngsters who haven’t quite made the grade in the National Football League (NFL) or Canadian Football League (CFL) but who could transfer their skills to rugby league.

But that’s a longer term project.

How are they financed?

But they have several sponsorship deals in place too. Not the least of them is with the Airline Air Transat. That deal will cover Toronto’s travel costs, but will also mean that each English team will travel free when they go to Canada to play against the Wolfpack at home.

Each English club will be able to take a full squad, coaches and ancillary staff to Toronto, at no cost to them.

English fans will also be given subsidised travel.

How will their fixtures work?

The Wolfpack have been based in England for their pre-season training. Following the match against Siddal, their opening five league games, starting with a match against London Skolars on 4 March, will be played in England.

Then Toronto fly home and over the next five weeks, English sides will fly out to play them.

That pattern is reversed throughout the season.

It’s expected that the English clubs will fly out on a Thursday morning, play the game on Saturday and then fly home on Sunday.

That might give the Wolfpack an advantage, but Perez is having none of that. In League 1, clubs are as far apart as Workington and Whitehaven in the north and London, Oxford, Hemel and Gloucester in the south.

He argues that players would rather spend eight hours on a flight, than six hours on a coach.

With a mixture of excitement and caution. Most players and coaches fancy regular trips to play in Toronto. And the idea of a side based in Canada has captured the public’s imagination.

But now their campaign is about to get under way, the proof of whether this business model can work will finally be tested.

There’s no hint of anything less than supreme confidence from Perez. And he’s already suggested that more North American clubs will be coming in the next few years, with Montreal and Boston mooted as the next staging posts.