Thousands in Canada still with no power, face travel woes days after storms 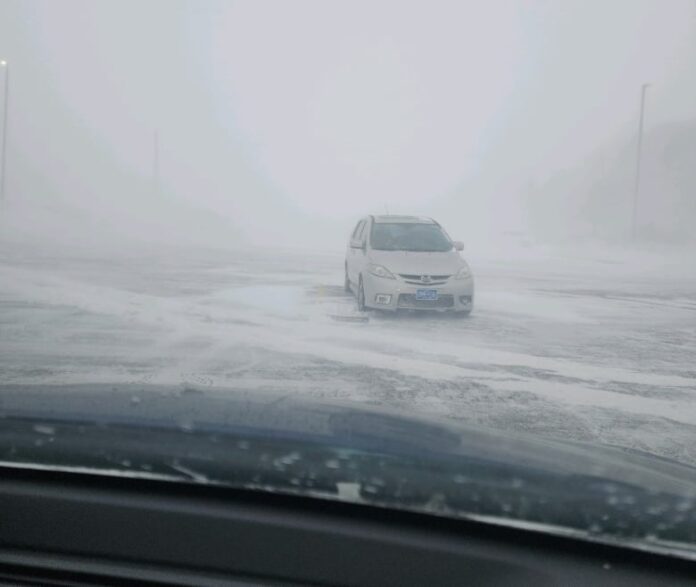 Thousands of people in Canada were still without electricity or facing travel headaches on Tuesday, days after fierce winter storms struck right before Christmas.

The storms have wreaked havoc with electric grids and travel plans for the last four days.

While the outage numbers have dropped significantly, tens of thousands of people remained without power Tuesday as crews continued the work to repair lines brought down by strong winds and fallen trees, complicated by heavy snow hindering access to some sites.

Quebec remains the biggest trouble spot, with about 27,000 homes and businesses without power. Hydro-Quebéc said the Capitale-Nationale, Laurentides and Saguenay-Lac-Saint-Jean are among the hardest-hit regions.

Hydro-Québec said it can’t give a restoration timeline for all customers because trees and other objects are keeping crews from accessing already difficult-to-reach areas. The company said it’s using about 1,200 hydro crews from across the province, and 10 helicopters to clear paths and complete repair work.

Just under 8,000 homes and businesses still without power are in Ontario, the vast majority of them in the Georgian Bay region north of Toronto, Hydro One said as its fourth day of storm restoration continued.

Another hard-hit area was Fort Erie, Ont., where about 4,300 customers were still in the dark on Monday, with power knocked out by fallen trees and broken telephone poles. According to a tweet on Monday night from Canadian Niagara Power, electricity was restored to more than 4,000 of affected customers.

The Niagara region, where Fort Erie is located, declared a state of emergency on Saturday.

Chatham-Kent, about 300 kilometres to the west on the shore of Lake Erie, also declared a state of emergency on Saturday due to heavy snow and high winds, but lifted it around 2 p.m. ET Monday.

Dozens of people had spent the night in a Walmart store in Chatham-Kent last Friday after the blizzard closed the roads around them.

WATCH | Hydro One crews in ‘final stretch’ of restoring power in Ontario: 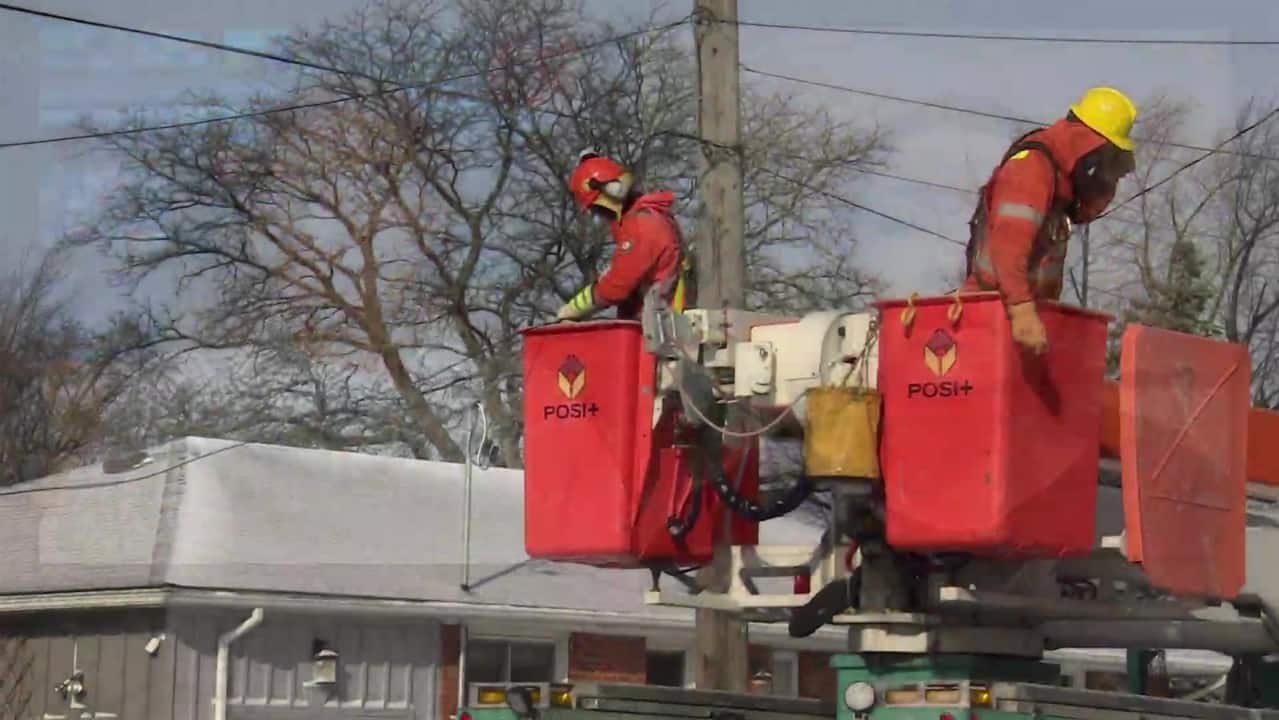 Hydro One crews in ‘final stretch’ of restoring power in Ontario

Despite access being hindered by snow and ice-encased equipment, crews working to restore power for remaining customers across Ontario, Hydro One spokesperson Tiziana Baccega Rosa says.

Hydro One said it hopes to have power restored to the bulk of affected customers by the end of the day — and harder-to-reach cottages “in the coming days,” said spokesperson Tiziana Baccega Rosa.

She said weather conditions have prevented the utility from getting helicopters and boats into the water in order to reach seasonal properties on islands or with water access only.

On Tuesday morning, New Brunswick Power had reconnected almost everyone who had lost power. It reported just under 400 customers still in the dark.

South of the border, storm-battered Buffalo, N.Y., braced for fresh snow on Tuesday while still striving to recover from an epic blizzard that killed at least 34 people in the region.

State and military police were being sent to enforce a ban on driving on snow-choked streets. County Executive Mark Poloncarz said police would be positioned at entrances to Buffalo and at major intersections.

The U.S. National Weather Service predicted as much as five centimetres of snow could fall in Erie County, which includes Buffalo.

While that’s a relatively small amount, it’s expected to hinder the removal of the 1.25 metres of snow that fell in some places, starting on Christmas Eve. Officials said the city’s airport will be shut through Wednesday morning.

The rest of the United States is also still reeling from the ferocious storm, with at least an additional two dozen deaths reported in other parts of the country, and power outages in communities from Maine to Washington state. The storm claimed 57 lives, over half in western New York, officials said on Monday.

In British Columbia, crews were making progress in restoring power after the winter wallop on the West Coast. BC Hydro said fewer than 1,000 customers, mostly in the Lower Mainland and on Vancouver Island, remained without electricity, down considerably from the height of the storm.

Despite BC Hydro’s progress, people in southwest B.C. were bracing Tuesday for possible flooding.

Rainfall warnings and flood watches remained in effect Tuesday as two successive storms were forecast to bring 60 to 120 millimetres of rain by late Tuesday night, according to Environment Canada.

Coastal flooding near the Strait of Georgia was expected around the high tide on Tuesday morning, the agency said. Vancouver was bracing for an elevated risk of flooding due to a storm surge with high winds and a high tide.

The province urged people to stay away from fast-flowing rivers and unstable riverbanks.

People in B.C. are also still dealing with the aftermath of a deadly Christmas Eve highway bus crash that police suspect may have been caused by icy weather. Four people died and dozens of others were injured in the Ebus crash east of Merritt near the Loon Lake exit.

Hundreds of Canadians have been stranded for days in Mexico after Sunwing cancelled their flights home, with many accusing the airline of “abandoning” them by not rebooking them on new flights or failing to make it clear where they will stay while they wait to leave.

“A number of return flights continue to be impacted by delays due to displaced crew and aircraft, resulting from the aftermath of severe weather disruptions across Canada,” the company said in a statement released on Tuesday.

Sunwing said it’s working “around the clock” to get passengers home.

“We have completed two recovery flights so far this week, have planned another eight recovery flights which are scheduled to depart up to and including Dec. 30, 2022, and are currently finalizing recovery plans for our remaining passengers in destination,” the company said.

For southbound flights, Sunwing announced on Monday afternoon, via Twitter, that the baggage belt at Pearson International Airport’s Terminal 3 was not working, and as a result, it couldn’t guarantee that customers’ checked baggage would accompany them on aircraft leaving Toronto.

I’ve never seen anything like this at Pearson Airport in Toronto. <br><br>A mass of humanity and luggage upon arrival. <a href=”https://t.co/VfOOYxSoWA”>pic.twitter.com/VfOOYxSoWA</a>

Early Tuesday, the airport tweeted that the baggage belt in question was operational again.

However, due to a high volume of passengers and staffing issues, the airport is still dealing with delays in getting arriving passengers their baggage, Tori Gass, a Greater Toronto Airports Authority spokesperson, told CBC News on Tuesday.

“We have brought in staff from elsewhere in the airport, as many as we can, to help the airlines out and to put more bodies into the baggage halls,” Gass said. 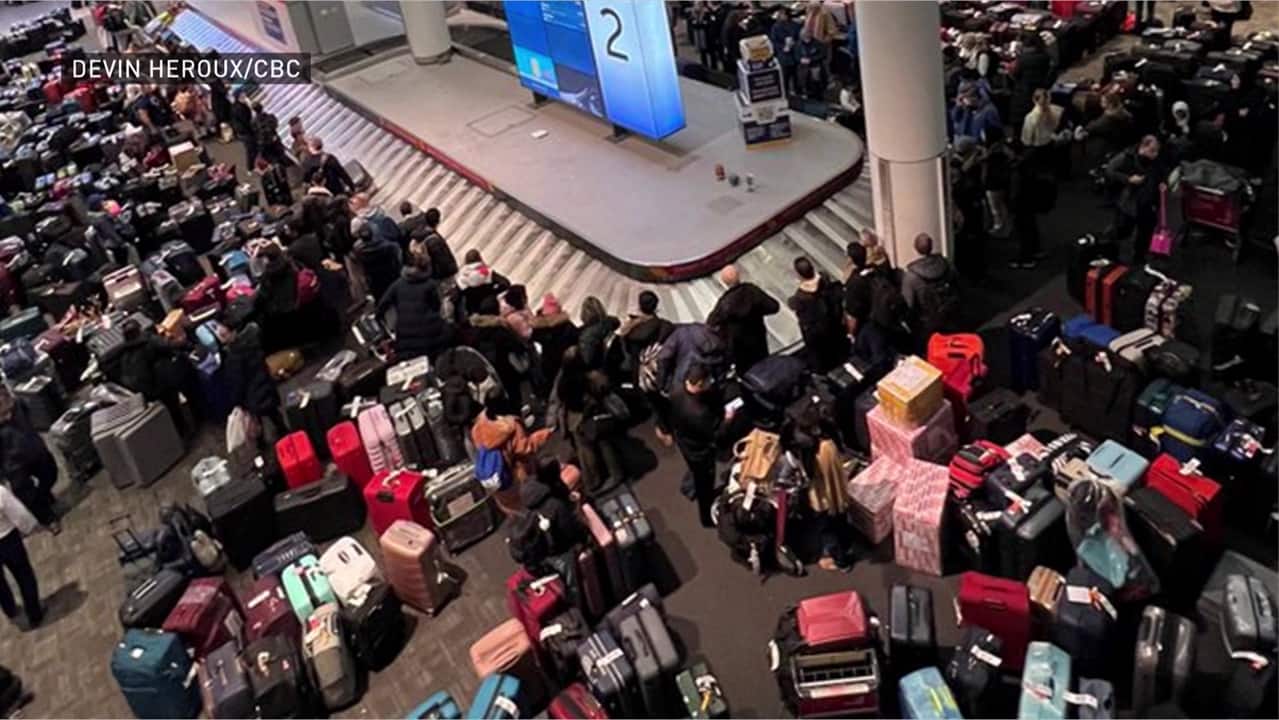 Spokesperson Tori Gass says the Greater Toronto Airport Authority has been working ‘behind the scenes’ to support airlines as they work to resolve delays and disruptions caused by winter storms.

For train travellers, Via Rail planned to have trains running again on Tuesday from Toronto to Ottawa, as well as Ottawa to Montreal. Via said trips from Toronto to Montreal will run on a “modified schedule,” but has  warned of possible delays.

Service was cancelled for Christmas Day and Boxing Day because of a CN train derailment on Saturday near Grafton, Ont. The accident shut down a stretch of track and left passengers trapped aboard trains for hours on the weekend.