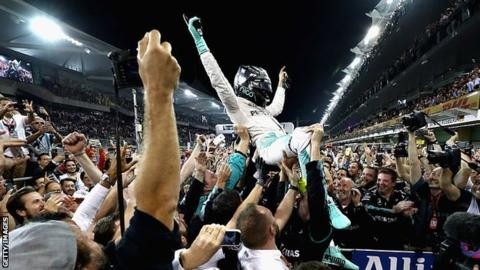 Retro cars, dreaded phone calls and a licence to entertain? The new Formula 1 season must be fast approaching.

They discussed tactics, changes and life without deposed boss Bernie Ecclestone, as well as tackling your questions.

First up was Mercedes boss Toto Wolff. We asked you to send in your questions using #AskToto, and here’s what he had to say…

“You need to ask them, but I think we are both pretty sensible guys.”

Dave Cox: Are the cars really going to be two to three seconds quicker per lap?

“I think they are going to be faster because there is simply much more downforce; they are wider.

“They look quite cool. I am not such a big fan of the swept rear wing, but the car looks spectacular from the front and rear and, when you add those fat tyres, it is a little bit retro, a little bit 80s – lots of technical detail on the bodywork, which is fascinating.

“How they look is definitely better, but how they will drive and how much faster they will be, we don’t know because we haven’t seen the tyres perform yet.”

Peter Harrison: Will you ensure that both Lewis Hamilton and Valtteri Bottas give us a good, but fair, title battle this season?

“Regulations have changed and it is all points back to zero. I hope we have a car good enough to get race wins and the championship, but we will continue to give them equal opportunity.”

Adam Barton: How do you keep the team motivated to progress despite three years of dominance?

“We spend a lot of time redefining our objectives. The regulation change has helped us get that extra motivation to do it right once again.”

Ross Brawn has been made the sport’s new managing director of racing, and the former Mercedes boss told the panel entertainment will be key to success…

“There are some straightforward issues, but the solutions are going to take some time,” he said.

“You can’t change a sport as complex as Formula 1 overnight but the message is that we are fighting to make the sport as entertaining and as viable as we can.

“I hope with the continued pressure we can apply, we can steer the sport into a better place.”

‘I knew Toto would call’

Why did Mercedes take Bottas?

“Because he is a fantastic talent and the all-round package. One of the great things about Valtteri is he is such a team player, very apolitical and, as a team boss, you always want someone like him who isn’t going to cause problems, who is going to pull down the visor and just go for it.

“He is a typical Finn, very cool, calm and collected. There is a definitely an emotional streak that runs through Valtteri. He was extremely keen to get into that Mercedes.

“He will bring that to the team, but you don’t want that coming into the cockpit when you’re hurtling round a track at 200mph.

“He was a big part of our ambitions but it is not right to stand in a driver’s way when a seat like Mercedes comes along.”

What about Felipe Massa’s return?

“We needed someone in the second car who had experience. It was fantastic that he agreed to come back, for us it is the ideal solution.”

What are your hopes for Williams in 2017?

“We have done a lot of work in restructuring and the future remains bright. To put any sort of performance expectation on it is difficult because of the new regulations, but we have to move up from fifth.”