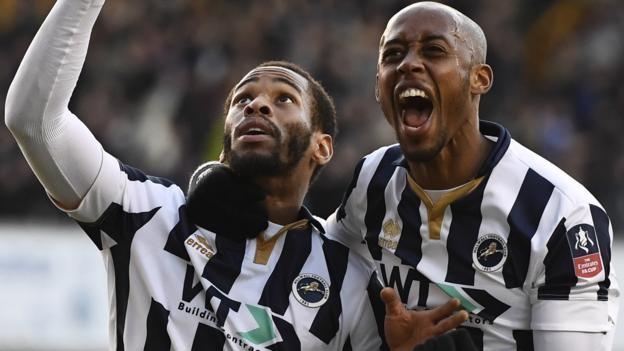 Ten-man Millwall secured a stunning upset with a last-minute winner to beat Premier League champions Leicester City and reach the quarter-finals of the FA Cup.

The League One side had defender Jake Cooper sent off in the 52nd minute for two bookable offences.

However, Shaun Cummings grabbed the dramatic winning goal when he collected Lee Gregory’s pass, cut in from the right side, went past a Leicester defender in the box and finished low past Ron-Robert Zieler.

Millwall, 33 places behind Leicester in the English football system, have reached the last eight of the competition for only the third time in 32 seasons.

A memorable day for the Lions

Millwall were playing their fifth match of this year’s competition and had defeated Premier League sides Bournemouth and Watford in the last two rounds.

However, their chances of causing another surprise looked to have ended early in the second half when Cooper was dismissed.

He picked up his first booking at the end of the first half when he tried to kick the ball out of Leicester goalkeeper Zieler’s hands before he was sent off following a needless sliding challenge on Ahmed Musa, who was still in his own half and close to the right touchline.

Nevertheless, Neil Harris’ side, sixth in the third tier, were the better of the two sides for the remainder of the match with their manager making attacking changes as they pushed for the win.

And, in a dramatic conclusion, they got the goal and managed to hold on to spark jubilant scenes of celebration at a sold-out Den.

The Lions’ last appearance in the last eight came in 2012-13 and they will now be waiting to see who they get in the quarter-final draw.

That will take place at 18:30 GMT on Sunday and can be watched on the BBC News channel and the BBC Sport website, with commentary on BBC Radio 5 live.

Millwall will be joined in the draw by National League side Lincoln City after the Imps won 1-0 at Burnley to become the first non-league side in 103 years to make the FA Cup quarter-finals.

But the Italian will be furious with a missed opportunity and he criticised his players after the match, saying that Millwall played with “more heart” and “more desire” following Cooper’s red card.

However, it is another day to forget for a Leicester side that won the Premier League by 10 points last season, but are now involved in a battle to stay in the top flight and have suffered an FA Cup embarrassment.

To make things worse for Ranieri, defender Molla Wague, who was making his debut after joining on loan from Italian team Udinese at the end of the transfer window, faces a lengthy absence after dislocating his shoulder in the second half.

‘These are special days’ – what they said

Millwall manager Neil Harris: “This sums up the FA Cup as a whole. It doesn’t happen by chance. We are on a great run and have great spirit.

“When we went to 10 men it galvanised us. There was more pressure on Leicester. I made attacking changes to win the game because neither of us wanted a replay. When we needed that bit of quality Shaun Cummings provided it.

“I thought the atmosphere was electric. The noise was phenomenal. These are special days for us. The fans feed off the players and players off the fans.”

Millwall goalscorer Shaun Cummings: “It was a very good team effort, especially since we were down to 10 men.

“I saw an opportunity to run forward and get in the box and it just opened up for me.

“This is our home ground and you can see the atmosphere. Any team we get at home, we can do a number on them.

“We are in the competition to win it. It is nice we have got this far. We have to keep moving forward. Hopefully we will get another home draw and we move on from there.”

Leicester manager Claudio Ranieri: “I am very disappointed. We played well in the first half, so-so at the beginning of the second until it went to 10 v 11. After then they played better than us, with more desire and heart and deserved to win.

“We can learn. When a team from League One beats the champions we say why and have to react as soon as possible. We are better than Millwall, but Millwall deserved to win.”

Millwall play Chesterfield in League One on Tuesday (19:45 GMT), 24 hours before Leicester play in Spain against Sevilla (19:45 GMT) in the first leg of their Champions League last-16 tie.

The Foxes return to Premier League action on Monday, 27 February with a home game against Liverpool (20:00 GMT).