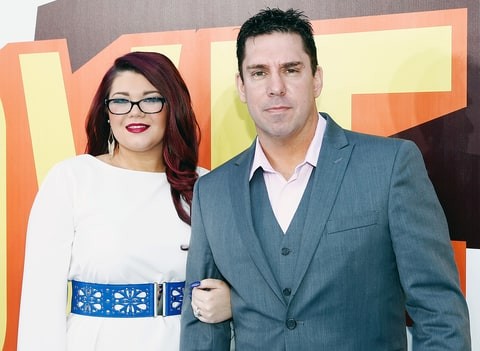 Amber Portwood knows all too well that the truth hurts.

During Monday night’s season finale of Teen Mom OG, cameras followed the reality star and Matt Baier as they headed to Los Angeles for the MTV Movie Awards.

After enjoying the show with Teen Mom 2 star Kailyn Lowry, Amber received news from a girl claiming Matt tried to sleep with her. What came next was a polygraph test with plenty of mixed results.

When asked if he has engaged in any sexual activity or communications with anyone other than Amber since October 10th 2014, Matt said no and was confirmed to be telling the truth.

As for the third question, that’s when things went south. “Did you make any sexual advances toward [bleep]? On that question, Matt answered no, but he did not pass that question,” the examiner stated.

Within seconds, Amber stormed out of the room while shouting out profanities towards Matt. In fact, she punched an elevator wall before being held back by producer Kiki.

“It’s a very vague question. I passed the direct ones. I’m sorry she’s upset but I didn’t do anything wrong,” Matt later shared outside. “I didn’t cheat. I never would and when she settles down, she’ll realize that. That’s the important thing. I win. I passed.”

As for Amber, she couldn’t help but sob after learning about the results.

“Man, my baby. What is she gonna say to me?” Amber asked when speaking about her daughter. “I’ve wasted seven years of my life with a man. And then I wasted three years of my 20s. My teenager years and my 20s.”

“I’ve been through so much s–t,” she added through tears. “I just want a break.”

While fans will have to wait until the reunion show to learn more about this pair’s relationship status, E! News has learned the duo recently checked into Marriage Boot Camp.

And before you think this relationship is completely done, Amber recently told E! News that this love affair still has some hope.

“We’re working things out. We’re working on our issues,” she shared earlier in the month. “That’s all that needs to be said.”