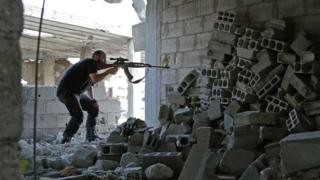 The Syrian military has declared a halt in fighting in parts of the rebel-held Eastern Ghouta region outside Damascus.

The move came after Russia, an ally of the government, said it had reached an agreement with “moderate” rebels to de-escalate conflict in the area.

Analysts warn it is unclear whether the deal can be enforced.

Eastern Ghouta was one of four proposed “de-escalation zones” in a deal agreed between Russia, Iran and Turkey in May.

In a statement, the Syrian army said a cessation of hostilities in areas of Eastern Ghouta came into effect on midday local time on Saturday (09:00 GMT).

“The army will retaliate in a suitable manner to any violation,” it said.

Rebel group Faylaq al-Rahman welcomed the pause and urged the government to respect it.

Monitoring group the Syrian Observatory for Human Rights reported some isolated shellfire after the ceasefire took effect but no major fighting.

Earlier on Saturday, Russia said an agreement with rebels had been signed at talks in the Egyptian capital, Cairo, on how a safe zone would function in Eastern Ghouta.

It said the deal defined the boundaries of the zone and set out a plan for the deployment of forces to monitor the reduction in fighting.

However, correspondents say there are various rebel factions operating in Eastern Ghouta and it remains to be seen if the cessation will hold.

In May, the Russian military announced a so-called “memorandum on the creation of de-escalation areas” after talks in Kazakhstan’s capital, Astana.

However, delegates for rebel forces stormed out of the talks in protest.

The agreement aims to halt attacks by all sides and allow relief supplies and medical aid into besieged areas.

As well as Eastern Ghouta, the de-escalation zones to be established are:

The Syrian government was not a signatory but state-controlled media said it supported the initiative.

Although fighting in all four zones initially eased, the deal has not been fully implemented over disagreements on how to monitor the cessation of violence.

Syria’s war has claimed more than 300,000 lives since it erupted in 2011, with millions more displaced.