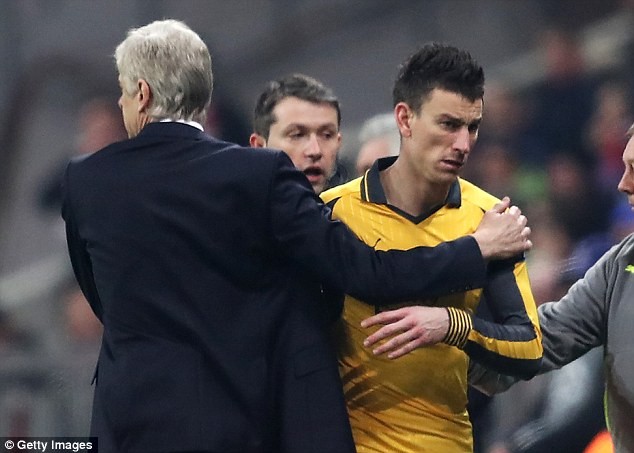 How to follow:
Live on BBC One, BBC Radio 5 live and BBC local radio; text commentary on the BBC Sport website

However, Ben Jefford, Jack Jebb and Craig Dundas are all cup-tied and ineligible for Monday’s game.

Arsenal are expected to be without centre-back Laurent Koscielny, who was forced off against Bayern Munich with a hamstring injury.

Danny Welbeck played for the Under-23s against Leicester on Sunday, meaning he could be left out.

The Gunners’ next game is not until 4 March and manager Arsene Wenger has indicated he will pick a strong side.

Steve Wilson: “Once in a footballing generation there comes a match so incredible that it belongs in the pages of Roy of the Rovers.

“Perhaps with this cup run Sutton have surpassed even all those non-league heroes of legend, from Blyth to Wimbledon, Yeovil to Leatherhead, Woking to Hereford – even Sutton’s own 1989 vintage.

“This is a game that has upturned Sutton’s world so completely that maybe no one should be surprised that, since beating Leeds, they have drawn one and lost three games – scoring only once.

“Arsenal’s world came crashing down in Munich. Wenger’s response to his critics in Friday’s press conference was well aimed. By stating that he’ll be managing somewhere next season – even it’s not at Arsenal – he was effectively telling them there are plenty more fish in the sea.

“Becoming the first manager to win the FA Cup seven times would be a good way to sign off – if that’s what he chooses.”

WHAT THE MANAGERS SAY

Sutton United manager Paul Doswell: “There’s two ways of looking at it. You either get the likes of [Mesut] Ozil and [Alexis] Sanchez and [Olivier] Giroud – and you can just keep naming them – in which case we would lose the game comfortably but the lads would get the experience of having played a Premier League giant.

“If you see Ozil and Sanchez on the team sheet our chance doesn’t come beyond nought. Or you go the other way and you play a team of under-23s that are still internationals mixed in with one or two of their squad players, and that gives us that one percent chance that we’d be after.”

Arsenal manager Arsene Wenger: “Everyone focuses on the next game, to take care of the consequences a disappointing result can have on everybody’s spirit and to make sure we bounce back and focus on the next game.

“We have to deal with the media and our job is to and analyse with clarity what happened [against Bayern Munich]. We can’t influence the last result.”

I think Arsenal will win against Sutton. It’ll be tough because Sutton are very good at playing on their artificial surface, but since beating Leeds in the fourth round, they have scored one goal and conceded 10 in four matches. It is understandable if they have switched off mentally.