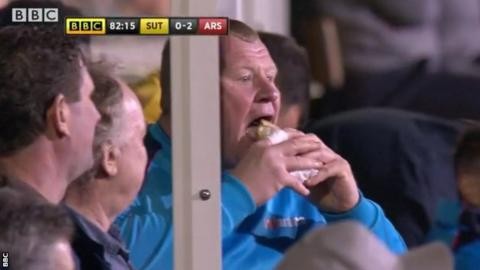 The Gambling Commission says it is investigating whether there was a breach of betting regulations during Arsenal’s FA Cup win over Sutton.

Before Monday’s game, a bookmaker offered odds of 8-1 that Sutton reserve goalkeeper Wayne Shaw would eat a pie on camera during the match.

The 46-year-old did so in the 83rd minute while standing by the substitutes’ bench.

Shaw said after the match that the incident was “a bit of banter”.

Asked whether he knew if anyone had taken up the bet, he told the Daily Mail: “I think there were a few people. Obviously we are not allowed to bet. I think a few mates and a few of the fans.”

The Gambling Commission, which licenses and regulates gambling in Britain, says it looking into whether there was any “irregularity in the betting market and establishing whether the operator has met its licence requirement to conduct its business with integrity”.

“Integrity in sport is not a joke and we have opened an investigation to establish exactly what happened,” said enforcement and intelligence director Richard Watson.

Sun Bets, who sponsored the club on Monday for the fifth-round tie, tweeted it had paid out a “five-figure sum” to one punter who had bet on Shaw to eat the pie.

Sutton manager Paul Doswell said after the game: “I don’t think it shows us in the best light.”

Club chairman Bruce Elliott told 5 live: “I didn’t know anything about it. He has got himself in the papers again and the fame obviously has gone to his head a little bit, but we will soon bring him back down to earth, don’t worry about that.”

Shaw said he was told about the betting promotion before the game.

“It was just a bit of banter for them. It is something to make the occasion as well and you can look back and say it was part of it and we got our ticket money back.”