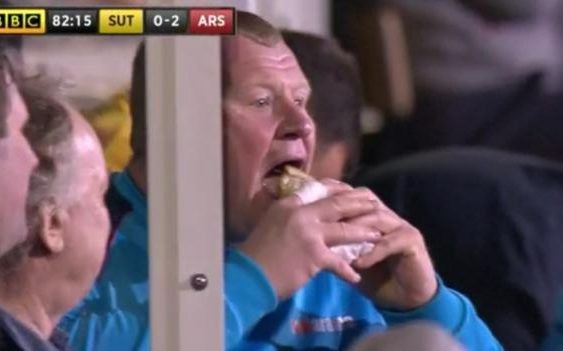 Sutton United have accepted the resignation of reserve goalkeeper Wayne Shaw, who is under investigation for potentially breaching betting rules.

The Gambling Commission and Football Association are investigating if there was a breach of betting regulations after the 46-year-old ate a pie during Monday’s FA Cup loss to Arsenal.

A bookmaker had offered odds of 8-1 that Shaw would eat a pie on camera.

“It’s something that we’ve dealt with quickly as a club,” he told Sky News on Monday. “Wayne himself offered his resignation to the chairman this afternoon, which has been accepted.

“It’s a very sad end to what has been a very good story.”

Shaw, who said he was aware of the betting promotion prior to the match, played the incident – in which he ate the pie while standing by the substitutes’ bench – down as “a bit of fun”.

“We are told we are not allowed to gamble as it is full-time professional football,” Shaw told BBC Radio 4’s World at One programme. “In no way did I put anyone in jeopardy of that – this is not the case here, this is just a bit of fun and me being hungry.”

However, the Gambling Commission confirmed it was looking into whether there was any “irregularity in the betting market and establishing whether the operator has met its licence requirement to conduct its business with integrity”.

“It’s clear in FA rules that you’re not allowed to bet – and whether it was a fun bet, or whatever it was, it wasn’t acceptable,” added Doswell.

“Obviously we were very concerned with the implication that the club, myself, my assistant Ian Baird or anyone else had been involved in the decision-making.

“It’s been very disappointing, there’s no doubt about that. I woke up this morning to this storm of criticism.

“It’s with a very heavy heart, because he was a good friend of mine, but I think the board felt they had no other choice.”