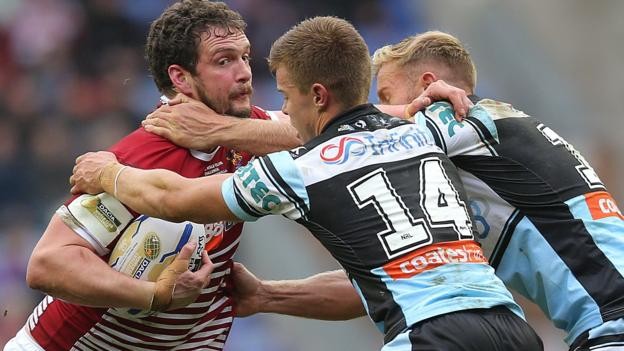 English rugby league should look to expand to Australia, according to Wakefield director of rugby John Kear.

Canada’s Toronto Wolfpack will play in the English third tier this season.

“I think we can globalise the game commercially and competitively,” Kear told BBC Radio 5 live.

“It is feasible and it does make sense. I’m a big supporter of the Toronto experiment and I’m sure that if that’s successful then you could look to expand the game to other cities in North America.

“Perth or a team from Papua New Guinea or Fiji could get involved in our competitions.”

At present the vast majority of the 16 NRL teams are on Australia’s east coast with other teams in Melbourne and Canberra, plus the New Zealand Warriors.

Kear believes the mentality of the NRL could lead to clubs on Australia’s west coast, such as Perth, being interested in competing in an English competition.

“If the NRL have any sense then they would look to support it. The sport is massive in Australia and generates a huge amount of revenue,” he added.

“I’m certain we could develop Super League there and the NRL should welcome it and look to assist us because the bigger the game is the better it is.”

‘The logistics are not a problem’

Sydney Morning Herald journalist Steve Mascord said Super League sides should start “standing up for themselves” against the NRL.

He told BBC Radio 5 live: “Five years ago if someone had asked you what was more likely, a team in the British competition in Toronto or in Perth then you would have said Perth.

“Why not start the Super League season in Australia? It’s been discussed and it’s a genuine possibility.

“It’s time for the game in the northern hemisphere to tap into the money that is in the sport in Australia.”

He added: “Don’t talk to me about the logistical problem. In the Super 14 rugby union competition the transit time from Dunedin to Pretoria is the same as getting from Australia to England.

“It can happen all year round and the benefits to the game in terms of sponsorship and broadcasting would be enormous.”

St Helens captain Jon Wilkin believes that English rugby league is missing out by not having a team in either Manchester or Liverpool.

The former England international thinks Salford Red Devils should look to move to Manchester from their current base in the AJ Bell stadium in Eccles.

“Sentimentally Salford are attached to where they’re from but you can not let history be the anchor that drags you under,” the 32-year-old said.

“Salford need a bigger fanbase and I think they need to engage with fans in Manchester city centre. There is an opportunity there.

“Having Manchester and Liverpool as hubs for the game has to be a focus for the sport.

“We need a strategy and we need to get to know big business better. I think the sport has been treading water for a while now.”