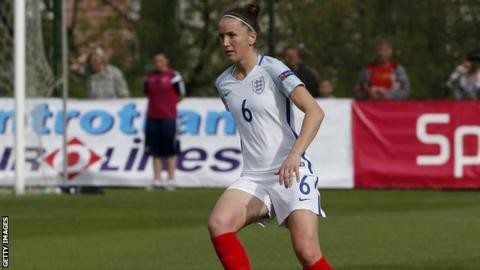 Liverpool defender Casey Stoney has recovered from injury and been recalled to the England squad for next month’s SheBelieves Cup in the United States.

England take on the three top-ranked teams in the world – the USA, Germany and France – in the tournament.

Head coach Mark Sampson has made seven changes to the squad that lost to Norway and drew with Sweden in January.

England face France in their opener on 1 March in Pennsylvania.

They then face the hosts and world champions in New Jersey on 4 March and European and Olympic champions Germany in Washington on 7 March.

Following that, Sampson’s squad are expected to play several other friendlies before their Euro 2017 campaign gets under way against Scotland on 19 July in the Netherlands.

England came third in the SheBelieves Cup last year, drawing with France and losing narrowly to Germany and the US.

Sampson said: “Last year we came close but didn’t get over the line. This year we need to put that right and find our way to win. We are improving with every camp and we go to the US in the best shape we have been as a group.

“We’ll be coming up against some really tough opposition but winning this tournament has to be our objective and would be a real feather in our cap going into the Euros.”