Soyinka How Nobel laureate shouted at Jonathan after Chibok kidnap 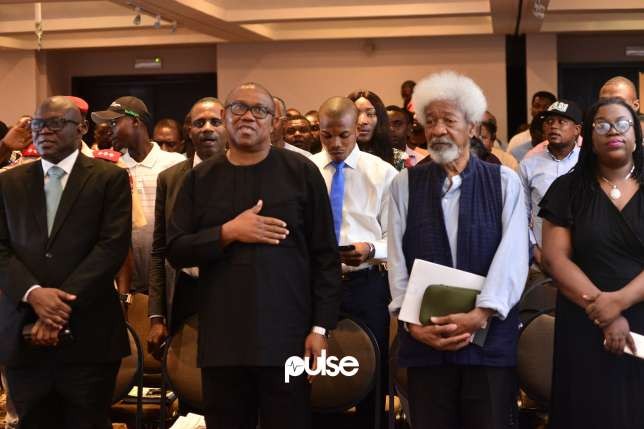 Soyinka How Nobel laureate shouted at Jonathan after Chibok kidnap

Prof Soyinka screamed at Goodluck Jonathan after schoolgirls were kidnapped from Chibok. Jonathan’s response will interest you.

Speaking during a dialogue session organized by Ripples Nigeria on March 15, 2018, Soyinka cited instances of lack of empathy and poor leadership from Nigeria’s presidents–from Olusegun Obasanjo to Muhammadu Buhari.

On January 27, 2002, bombs stockpiled in a military storage facility in Ikeja, Lagos, exploded into the afternoon sky; shaking Nigeria’s commercial capital to its foundation and causing hundreds to perish in a canal as they fled for dear lives.

“The national armoury went off, lobbing bombs into both commercial and residential areas…leaving gaping holes in roofs of homes including that of our literary comrade JP Clark.

“Ikeja was in collective panic, not knowing what demons from hell had descended upon them. Hundreds drowned in the canal—that weed covered canal–in a directionless plight to save their lives. The bombardment had registered in their minds as an invasion.

“And what was the government doing? The president at the time, the Commander-in-Chief, Olusegun Obasanjo, he did visit the scene of carnage, but it could have been much better if he had stayed away.

“Because when he got there and the bedraggled survivors surrounded him, protesting, what he did in response were words…a further devastating barrage.

“What do you want me to do? I am not obliged to be here’, Obasanjo said. Well spoken. Dr, General, ex-president Chief Olusegun Obasanjo”, Soyinka said, tongue-in-cheek.

Soyinka also took on Jonathan who was anointed president by Obasanjo and who oversaw affairs as Nigeria’s president from 2010 to 2015.

“Your immediate successor, whom you boasted you yourself emplaced singlehanded…oh wait, with a little help from God…that is president Jonathan, now waited for nearly three weeks to accept that 270 plus of our children had been abducted from Chibok village.

“He insisted it was all a ploy by the opposition to discredit his government and thus precious days were lost when those girls could have been saved.

“His wife, proceeded to stage one of the most nauseating acts of incoherent, meaningless and purposeless investigative charade. Anyway, the business of clowning is very lucrative these days”, Soyinka said amid laughter from the room.

He was of course referring to Patience Jonathan’s viral “Chai…There is God o” moment.

At this point, Reuben Abati who served as Jonathan’s spokesperson and who was in the room, didn’t know whether to laugh with the audience or keep a straight face.

Abati was moderating the event.

Soyinka said he held nothing back when he spoke to Jonathan over the phone.

“Let’s go back to the former president. I call him up and protested to him. I used to call him over the phone. People say we don’t talk to each other. We do, you know.

“So I call him to chide him severely on his reaction.

“I said to him, ‘you want the acceptance as a political leader and you do not even accept that it is your duty to have been there, at the scene of disaster created furthermore by your own military? Did you actually utter those words attributed to you? “

Soyinka says Jonathan’s response has left him stunned till this day.

“His response remains a riddle to me till today. His actual words were Kampala tie niyen. That is your own Kampala. This is one of those things, wrapped in a conundrum which I have not succeeded in untying till today. I have tried to decode it in so many ways. All I could arrive at is a tissue of the same expression: Kampala tie niyen.

“Whatever the origin or the strict translation of that expression nonetheless takes us to the nation’s greatest Kampala—Dapchi”.

He called the wedding which was also graced by over 20 State Governors an “exhibitionist lavishness so soon after a national calamity”.

Soyinka said Buhari should have told those who invited him that he was not obliged to grace the wedding.