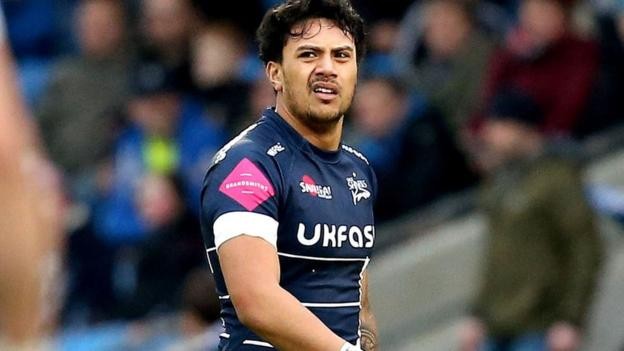 A hat-trick from Denny Solomona pushed Sale to victory in a high-scoring affair against leaders Wasps.

Sale had raced to a 31-9 lead just after half-time at AJ Bell Stadium before Wasps found their groove.

Tries from Josh Bassett and Ashley Johnson put them back in touching distance at 31-21 before Sale’s Will Addison delivered a vital three points.

Kurtley Beale scored Wasps’ third try 11 minutes from time and that made for a tense finish but Sale held firm.

Wasps had been unbeaten in their past six Premiership matches but looked off the pace from early on. Conversely, Sale showed quickly they wanted to make a statement and did so through rugby league covert Solomona.

His move from Castleford Tigers has attracted controversy off-the-field, but on it, his hat-trick took his try tally to seven in his first five matches – a new Premiership record.

Another new face, South Africa international Willie Le Roux made his Premiership debut for Wasps and the full-back set up Beale’s try after coming off the bench.

But as Wasps threatened in the closing stages, Sale replacement scrum-half Peter Stringer gained a vital turnover and marshalled his pack to help run down the clock.

Sale remain in 10th place, but open up a 10-point gap above Worcester, who lost to Exeter this weekend.

At the other end, Wasps remain top by six points, but missed the chance to go as much as 10 points clear of Saracens and Exeter in joint-second.

“First half was particularly good. It was a training ground move for the first try.

“Denny’s shown his true class a couple of times and he should have got another one really shouldn’t he?

“It’s good to get us past the 25-point mark, which I always think you need to stay in league.”

“I’m sure there will be accusations of complacency, but I don’t think that was the case.

“It is very hard to argue that we weren’t where we should be at mentally. We made uncharacteristic mistakes first half that we haven’t done all season.

“We haven’t lost too many physical battles this season so you have to look at yourself really – they had an edge today that we didn’t have.”