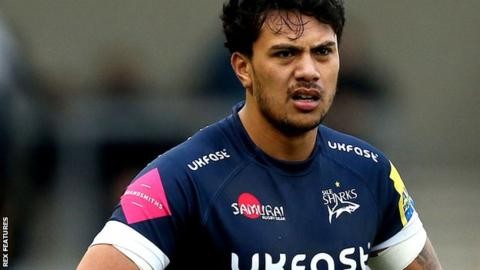 Former England winger Ugo Monye believes Denny Solomona has a good chance of playing for the national team when he becomes eligible.

New Zealand-born Solomona, 23, will be available for Eddie Jones’ side later this year after playing in England for the past 36 months.

He left rugby league when he switched codes to join Sale Sharks in December.

“Is he good enough for England, based on what I’ve seen? Most definitely.

“The beauty of English rugby at the moment means we’ve got so many quality players and out of nowhere in the few months we’ve unearthed another potential international. It’s a fantastic position for Eddie Jones to be in.”

Solomona won a rugby league cap for Samoa last year, but that would not affect him meeting residency criteria for the 15-a-side code.

After successful spells with London Broncos and Castleford Tigers, including a record-breaking 40 tries in a single season, Solomona has caught the eye since joining Sale with seven tries in five Premiership games.

“He’s a natural-born finisher, his try against Northampton was the best finish you’ll see from any winger this season,” said Monye, who believes the British and Irish Lions summer Tests in New Zealand and Argentina could be a good way to introduce Solomona to international rugby.

Sale director of rugby Steve Diamond has echoed Monye’s thought, saying that Solomona has the “world at his feet”.

Diamond added: “He understands the game. His spell in rugby league did him no harm. He got his basic skills up and comes to the party a top-drawer professional. I’d be looking at him if I was Eddie Jones.”