Should Airbnb ban customers it disagrees with? 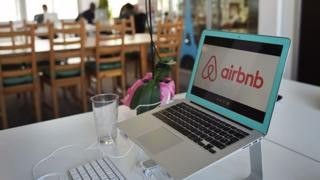 Organisers behind a white nationalist rally in Virginia are outraged after home-sharing company Airbnb kicked off users affiliated with the event.

Airbnb confirmed it was quietly cancelling accounts of those travelling to Charlottesville to attend the “Unite the Right” rally on Saturday.

The company cited its discrimination policy, but users decried the move as a violation of free speech.

The row marks the latest flashpoint in a debate over rights to free speech.

Members of the so-called alt-right movement, which includes groups accused of racism and anti-Semitism, are expected to descend on Charlottesville on Saturday for the “Unite the Right” rally, to protest against the city’s removal of a Confederate General Robert E Lee statue.

The event was scheduled to take place at a park that was also the locale of a raucous Ku Klux Klan rally in May. The park, formerly Lee Park, was renamed as Emancipation Park in June.

Speakers at the event include Richard Spencer, a leader of the alt-right movement, while members of the National Socialist Movement, the Traditionalist Workers Party and the neo-Nazi Daily Stormer website have said they will attend.

The Southern Poverty Law Center, which monitors hate groups, said the event could be “the largest hate-gathering of its kind in decades in the United States”.

However, it is unclear how many people the event is expected to attract. NBC29 reported that the event permit to host the event was for 400 people, but the Washington Post reports police are preparing for as many as 4,000 attendees.

Airbnb said it began removing accounts affiliated with the event after a user reported a thread of comments suggesting company properties would be used for after-parties for the neo-Nazi website, Daily Stormer.

The company issued a statement noting that it had established an Airbnb “Community Commitment” policy in 2016, which asked members to sign a pledge to “accept people regardless of their race, religion, national origin, ethnicity, disability, sex, gender identity, sexual orientation or age”.

The policy was created after the online accommodation site faced criticism over anecdotal evidence that black users routinely found it more difficult to book a room than white individuals.

The anti-discrimination agreement was directed at Airbnb hosts, but the latest move appeared to be the first time the company targeted guests.

The move caused a social media uproar, in which Twitter and 4chan users began posting Airbnb messages to banned users, noting the decision was “irreversible and will affect any duplicated or future accounts”.

In a statement to the BBC, rally organiser Jason Kessler called the move “outrageous” and said it “should be grounds for a lawsuit”.

“It is the racial targeting of white people for their ethnic advocacy. The Unite the Right rally is opposed to the historical and demographic displacement of white people. Would Airbnb cancel the service of black nationalists or Black Lives Matter activists for their social media activity? Of course not!”

Is this a free speech issue?

Airbnb argues that while it respects the right to freedom of expression, people have a moral responsibility to take action when facing extreme hatred.

The company cites its “Community Commitment”, or pledge to treat all people equally, in terminating accounts ahead of Saturday’s march.

Mr Kessler argues the company’s anti-discrimination policy was intended to keep renters from “denying service to individuals based on race, religion or other identity characteristics”.

“They have now unjustly expanded that policy to imply that they will search through your social media accounts looking for controversial opinions and deny service based on that,” he said.

The debate recalls a case appearing before the US Supreme Court in October, in which a Colorado baker with religious objection to same-sex marriage lost a discrimination lawsuit for refusing to create a cake for a gay couple.

The case is a touchstone for longstanding culture wars over same-sex marriage, religious freedom and the First Amendment right to free speech.

Though anti-discrimination laws offer protections to the LGBTQ community in 21 states and the District of Columbia, no federal law requires bars private businesses from refusing to serve customers based on sexual orientation.

As a private business, Airbnb may be entitled to those same freedoms.

In an interview with the BBC last year, Airbnb co-founder Brian Chesky said: “We made a decision that this is not a service for everybody. We said ‘take it somewhere else. Not Airbnb.

“We started this company with the belief people are fundamentally good. Mostly everyone is really good, but when you have 100 million people, there are some who don’t believe in what you believe in.”

Is AirBnB allowed to monitor its users?

While it is unclear how AirBnB screens its users for political beliefs, the company explicitly says it does conduct background checks on members by looking at public state and county criminal records as well as state and national sex offender registries on US-based users, according to its website,.

The company also said in a statement to the BBC it used “background check processes” and community input to identify users whose behaviour was “antithetical to the Airbnb Community Commitment”.

Some Twitter users pointed out that many AirBnB accounts are linked to Facebook accounts, which could allow the company to track those who RSVPd to the rally or similar events.