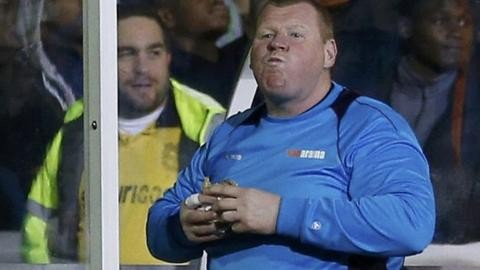 Shaw was seen to eat a pie on the bench during Monday’s FA Cup loss to Arsenal, after a bookmaker offered odds of 8-1 that he would do so on camera.

The Gambling Commission and Football Association are investigating if there was a breach of betting regulations.

Shaw, 45, resigned from the National League side less than 24 hours after the cup tie.

“I spoke to him on the phone and he was crying. In the end we had to almost stop talking to each other because it was that type of conversation,” added Doswell.

“We are going to be investigated, and it has turned into a bit of a nightmare.”

The bookmaker involved tweeted that it had paid out a “five-figure sum” on the bet.

Shaw, who first joined Sutton in 2009, said he had been aware of the betting promotion before the match but insisted the incident in which he ate the pie – which he later insisted was a pasty – was “a bit of fun”.

BBC Match of the Day presenter Gary Lineker claimed the incident showed “football has lost its sense of humour”.

But Doswell said that while he had sympathy for Shaw, he also felt he had been “naive”.

“He’s been caught in this mad world over the last month that has enveloped us. His profile has got bigger and bigger, I think he embraced that,” said Doswell.

“Whilst we were very much concentrating on the football, I think Wayne was almost becoming like a superstar.

“The team were magnificent against Arsenal, but to think someone’s openly eating a pie behind them reflects very much away from what they did. I know Wayne regrets it, he is very, very sorry about the whole situation.”

Shaw, who began his football career as a striker at Southampton in the same youth team as Alan Shearer, also had a coaching role at Sutton and carried out other jobs for the club such as sweeping the 3G pitch.

It is not the first time Shaw has been sacked by Sutton – he was dismissed in 2013 after an altercation with Kingstonian fans, but returned to the club two years later.

“I’m devastated for him,” added Doswell. “This is someone who’s got a family to support.

“My overriding wish is he’d have asked my advice because very clearly I’d have advised him not to do it. I wouldn’t have allowed him to do it.”