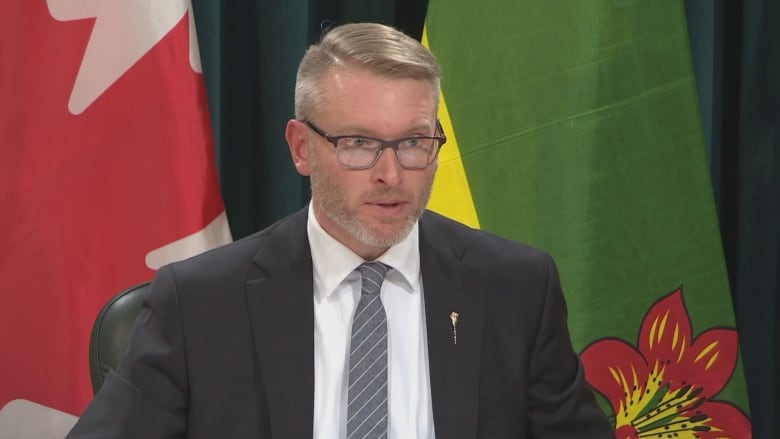 The Saskatchewan government says it will rethink its relationship with private nursing home operator Extendicare in the wake of an independent investigation that found the company was clearly unprepared to respond to the COVID-19 outbreak that killed 39 residents at its Parkside home in Regina.

“We’re looking at all of our options,” said Everett Hindley, Saskatchewan’s minister of Mental Health and Addictions, Seniors and Rural and Remote Health, after being asked whether the government is considering terminating its contract with Extendicare.

Hindley said the Saskatchewan Health Authority (SHA) has appointed an administrator over all five of Extendicare’s Saskatchewan long-term care homes for 30 days. He said the move was made to ensure the company acts on the recommendations stemming from a report he called “very troubling.”

After 30 days, the SHA will report back to the Ministry of Health.

“At that time, the SHA will re-evaluate its ongoing relationship with Extendicare and Parkside and whether it should continue,” Hindley said.

On Thursday, provincial ombudsman Mary McFadyen released a report detailing Extendicare’s failure to prevent and contain the outbreak, which killed 39 residents between November 2020 and January 2021. Three other infected residents died of other causes during the outbreak.

The report found, among other things, that staff kept working while symptomatic and that screening of employees entering the building amounted to, in one worker’s words, “an honour system.”

“Parkside was woefully unprepared for the COVID-19 outbreak despite all the corporate-level planning Extendicare did and all the support offered and provided to it by the Saskatchewan Health Authority,” the report said.

‘The ministry dropped the ball’: union

The investigation also found that the health authority — which acts as the operational arm of the province’s health system — did not always effectively oversee Extendicare.

“On behalf of the government, I want to apologize to the families and friends of all of those who died in Parkside as a result of COVID-19,” Hindley said.

Drawing from a trove of more than 20,000 emails, meeting summaries and other documents, McFadyen and her team offered a detailed look at the sometimes fraught relationship between the health authority and Extendicare, as well as the largely hands-off approach the Ministry of Health took to Extendicare.

The investigative team found that while the ministry enacted public-health measures during the COVID-19 pandemic, it did not directly enforce those rules at homes like Parkside.

The Ministry of Health was also not directly involved in any of the pandemic-related policies the health authority implemented, according to the ombudsman’s report.

“We were genuinely surprised by how little responsibility or accountability the ministry’s officials we spoke with believe they have to the authority or long-term care home operators regarding the proper functioning of the long-term care system,” the report said. “In the eyes of the public, it is the ministers whom we hold accountable if something goes wrong in the health sector.”

Two union groups that represent health-care workers at Parkside and called for an public inquiry into the outbreak — the Service Employees’ International Union-West (SEIU-West) and the Saskatchewan Union of Nurses (SUN) — said the government shares blame for what happened at Parkside.

“The Ministry of Health dropped the ball in a big way, and they’ve got some some cleanup to do,” said Tracy Zambory, the president of SUN.

“The Ministry of Health should be exercising a far greater level of oversight and supervision and direction to anyone who provides long-term care services in this province,” said Barbara Cape, the president of SEIU-West.

In an emailed statement, the Saskatchewan Health Authority said it accepted all of the ombudsman’s recommendations and that as of last March, all long-term care rooms in the province are limited to two residents.

Extendicare also phased out three- and four-person rooms at all of its homes across Canada beginning in December 2020.

“[We] will work co-operatively with [the SHA] to deliver the high-quality care that seniors need and deserve,” Extendicare said in its own emailed statement.

Months before the Parkside outbreak, the health authority and Extendicare were discussing the crowded rooms at the aging Parkside facility, the ombudsman’s investigation found.

“Despite both Extendicare and the health authority clearly acknowledging that Parkside’s use of four-bed rooms was cause for significant concern and engaging in discussions both internally and with each other during the spring, summer and fall of 2020, they did not take the steps necessary to actually decrease their use before the outbreak,” according to the report.

According to emails cited by the ombudsman’s office, Extendicare was concerned about the financial impact of decreasing the number of occupied beds at Parkside.

“For us to consider reducing our census, it must be tied to financial compensation for lost revenue,” Extendicare’s regional director wrote the SHA in late September 2020, two months before the outbreak was declared.

Ryan Meili, the leader of Saskatchewan’s opposition NDP, was blunt in his assessment of those findings.

During the summer of 2020, Extendicare met with the Ministry of Health to discuss the company’s decades-long lobbying efforts to have the province share in the cost of replacing Parkside. The facility was built in the mid-1960s, long before today’s standards for infection control.

No agreement to replace Parkside has been made.

“We are trying as best we can with the resources we have to update our repair and replace facilities,” Hindley, the minister responsible for seniors, said on Thursday.

Hindley said the province has in recent years discussed replacing Pioneer Village, a long-term care facility in Regina owned and operated by the province.

McFadyen, the ombudsman, declined to weigh in on whether the public should help pay for a facility run by a private company like Extendicare, which has reported profits from its homes across Canada for years.

“That is a public-policy decision that is up to our elected officials,” she said.

Extendicare’s masking practices in the months leading up to the Parkside outbreak were not in line with the province’s policy, and yet the Saskatchewan Health Authority did not address the issue until the outbreak was well in progress, the ombudsman’s office also found.

Instead of being provided with four masks per shift, Parkside workers were supplied with one mask and a paper bag to store it in per shift. The SHA raised this as a problem as early as April 2020, six months before the Parkside outbreak was publicly declared.

“Extendicare suggested that it was not clear if the authority’s masking principles and guidelines were recommendations, guidelines, or mandatory rules, and therefore, whether they had to be followed in Extendicare’s Saskatchewan facilities,” the ombudsman’s report said.

“This whole ‘one mask and a paper bag versus four masks per shift’ controversy is a good example of what we see as an issue with the relationship between the authority and private operators like Extendicare who provide care under contract with the authority.”

“Instead, they believed they could only encourage it to comply,” according to the report.

In one of her four recommendations to the SHA, McFadyen called on the authority to immediately update its agreements with private companies like Extendicare to ensure that “all operators are required to comply with care-related policies, standards and practices, including infection prevention and control measures, that are acceptable to the authority.”

Not requiring that “does not make sense to us,” the report added.

McFadyen made no recommendations to the Ministry of Health, but strongly encouraged the department to “play a positive role in helping the authority and all other long-term care operators to ensure that something like the Parkside outbreak never happens again.”

Opposition leader Meili and Zambory of the Saskatchewan Union of Nurses both called for something more drastic.

“We need to get rid of for-profit long-term care in Saskatchewan,” Meili said. “If it wasn’t before today, this report makes it completely crystal clear.”

Zambory, who worked as a nurse in publicly run homes, acknowledged they weren’t perfect, “but we certainly didn’t end up in this kind of horrific situation that we see ourselves in.”