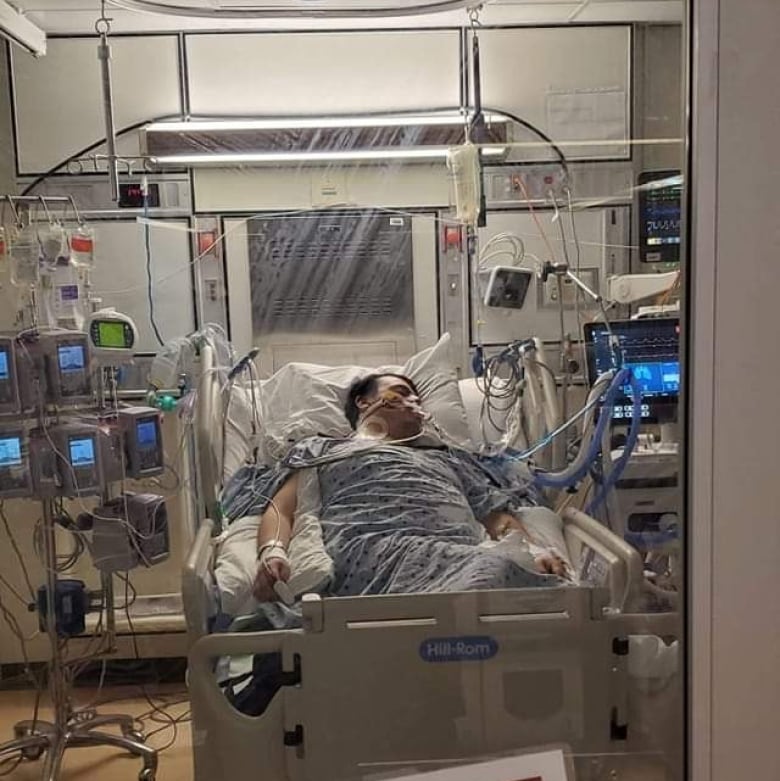 Matthew Cardinal, 35, is a COVID-19 long hauler and needs to see a respirolgist for his severely damaged lungs.

In late March, he was in an ICU bed fighting for his life after he contracted COVID-19.

He’s grateful for the small things in life, such as going for walks and sleeping in his own bed.

“Sometimes, I just wanted to slip away because it was just traumatic. It was hell being in the ICU,” Cardinal told CBC News.

Cardinal had to be sedated and put on a ventilator. He was in the ICU for a week, spending a total of 19 days in the hospital.

“My brother, my sister, they were so … heartbroken because they thought that’d be the last time they’d ever see me.”

‘I was threatened to get punched out’

Cardinal believes he contracted COVID-19 at the restaurant he works at as a server and bartender.

It’s the same restaurant where he’s now facing frustrated customers and the threat of physical violence while trying to enforce the province’s proof-of-vaccination policy, which came into effect at the end of September. Saskatchewan residents now have to show proof of vaccination against COVID-19 or a negative COVID test result to access several establishments, businesses and event venues, including for indoor dining at restaurants.

“There’s some people that throw tantrums and they get angry,” Cardinal said.

“I was threatened to get punched out … it was very confrontational.”

Cardinal said the restaurant owner was made aware of the situation and that the man involved has been banned.

He’s not disclosing his workplace to protect his safety.

Cardinal says it’s a small but vocal group of people who are putting the safety of staff and customers at risk.

“We’re given these simple rules to follow for our safety. It’s to get vaccinated so we don’t have these crazy outbreaks, so there’s no more Matthew Cardinals in the ICU,” he said.

Jim Bence, president and CEO of the Saskatchewan Hotel and Hospitality Association, says he’s “disappointed” with the mistreatment of workers that he has seen throughout the pandemic when workers enforce safety measures.

“It’s always been a concern of ours. For almost 20 months now, there’s been some firmly held ideals about certain things and it can be polarizing and it can be difficult,” he said.

“They’re taking it out on people that don’t deserve it.”

Last week, a gun was seized during an incident at a Saskatoon restaurant triggered by the vaccination requirement.

Cardinal says he’s concerned for workers dealing with verbal abuse or harassment on a daily basis.

“If someone doesn’t have backbone out there, how are they coping with this? There’s next to no support about this,” he said. “It worries me.”

Cardinal says he has had to deal with customers who are showing clearly altered vaccine wallet cards.

A couple, he said, presented a card that had the word “completed” handwritten on the line that is supposed to specify the date that someone received their second vaccine dose.

“I was baffled by it,” Cardinal said. “I explained to them very clearly. I said, ‘I’m sorry, but this one I cannot accept.'”

Cardinal said they were “frustrated” and “fidgeted” when he didn’t accept their invalid documents.

“Throwing a tantrum, getting angry is not going to get you anywhere,” he said.

“We’re just doing our job. We’re doing what’s mandated. And we didn’t sign up to get abused.”