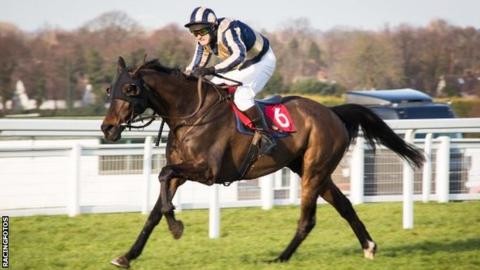 Guy Disney made history by becoming the first amputee jockey to win at a professional racecourse in Britain.

The 34-year-old former soldier, who rides with a prosthetic leg, guided Rathlin Rose to victory in the Royal Artillery Gold Cup at Sandown.

Captain Disney lost his lower right leg when his vehicle was hit by a grenade while serving in Afghanistan in 2009.

Disney, who came third in the race on Ballyallia Man in 2015, said: “To ride a winner here is very, very special.”

The David Pipe-trained Rathlin Rose was the 13-8 favourite and came through to claim the extended three-mile contest by four and a half lengths from Ardkilly Witness.

The annual meeting at Sandown is more than 150 years old and restricted to horses owned or leased by those who are serving or have served in the Royal Artillery.

“I’ve been phenomenally lucky,” Disney said. “I’ve been amazingly well looked after – people have had it far worse than I have. Some don’t make it back.

“It was quite frustrating when there was a lot of fuss for finishing third in 2015 – anyone who is in this wants to win it. It’s just nice to go a few places better now.”

Pipe, who trains Rathlin Rose at Pond House stables in Somerset, said: “It’s fantastic. He’s inspirational to everyone. It puts things into context.

“I didn’t appreciate how big a thing it is. Guy was very excited about it. He was speechless afterwards and just said ‘thank you’.”

All the stories of service personnel who fight to rebuild their lives after suffering life-changing injuries act as inspiration, none more so than Guy Disney’s.

He had been a winning point-to-point jockey before the Afghan incident, and applied for a riding licence afterwards, but the authorities were not at all keen.

There then followed a lot of the proverbial blood, sweat and tears to get one before Disney’s efforts were finally rewarded in late 2014.

The emotion of this occasion was high, and it was impossible not to be touched on hearing him speak of there being “a lot of things to think about, like the lads who aren’t here”.