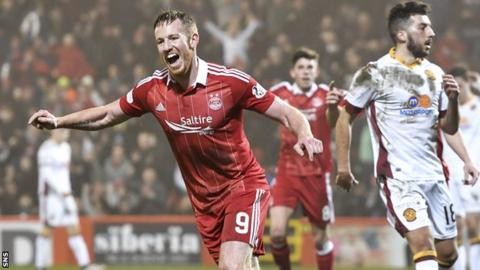 Adam Rooney hit a hat-trick as Aberdeen cruised three points clear of third-placed Rangers following a mauling of a woeful Motherwell side.

The Dons cashed in on terrible defending as Jonny Hayes, Andy Considine and Rooney made it 3-0.

Ryan Christie curled in a sublime fourth before the break and Rooney added a penalty and a tap-in.

Ryan Bowman and Stephen Pearson hit back for Well and Aberdeen substitute Peter Pawlett rounded off the scoring.

As well as moving three points and 19 goals clear of Rangers in the battle for second place, Aberdeen also reduced the gap on leaders Celtic to 24 points.

Motherwell, meanwhile, are in ninth spot.

The home side were utterly ruthless and exuded attacking threat. Well were simply atrocious at the back and their late rally did little to disguise their obvious deficiencies on the night.

When Hayes drilled home a left-foot effort after two minutes it looked ominous.

Motherwell briefly suggested they would not fold but fold they did – and much of it was self-inflicted despite Aberdeen’s brilliance.

Considine nodded the second at the back post from Niall McGinn’s corner, after Well keeper Craig Samson came and failed to get near the delivery. The big defender rejoiced in celebrating his goal and his recently extended contract.

The third goal was simply ludicrous.

Stevie Hammell knocked the ball towards the bye-line as he tried to deal with a cross into the area and in a moment of madness for an experienced player, Keith Lasley attempted to keep it in but fluffed it. It fell to Hayes, who squared to Rooney for an easy finish.

On-loan Celtic attacking midfielder Christie started in place of the suspended Graeme Shinnie and he excelled, with his strike proving the pick of the bunch.

From a well-worked corner, Considine laid the ball off to Christie who found a pocket of space and guided a delightful finish into the top corner.

Rooney’s penalty, after Shay Logan was clipped by Elliott Frear, added to Motherwell’s misery and the Irishman completed his treble soon after from close range following another McGinn corner.

The home side were in imperious form with Hayes, McGinn, Kenny McLean and Ryan Jack among the top performers in a side that was motoring for most of the night.

Despite Aberdeen’s dominance, Motherwell did manage to get two goals, but they were no consolation to the dejected players.

Keeping count? Well, it was a five-goal cushion again in 82 minutes, 60 seconds after Pearson’s goal.

This time it was Pawlett who showed great pace and a cool head to beat keeper Samson.

Motherwell manager Mark McGhee was also sent to the stand, to the delight of the home fans, on a night to forget for the Fir Park men.

They will hope this a one-off. The problem is they travel to table-topping Celtic on Saturday.