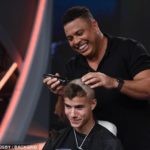 The 2002 World Cup provided us with one of the great storylines and one of the worst haircuts of all time; both were Ronaldo’s.

The Brazil striker’s two goals in the final was the ultimate redemption after the mystery and misery of the lost final four years earlier and the dreadful injuries that followed; the haircut was, well, simply awful.

We never thought we’d see the like of either again. Yet Ronaldo has returned to inflict his ghastly former style on one poor youngster while on Spanish TV.

Ronaldo, now aged 40, made an appearance on the El Hormiguero show in Madrid, where he played between 2002 and 2007.

For reasons only known to him, a teenage boy came on stage and allowed El Fenomeno and host Pablo Motos to take the clippers to his flowing locks.

What resulted was an abomination not seen since those distant days in Japan and South Korea: a head shaved almost to the skin with a longer peak remaining.

A laughing Ronaldo seemed to enjoy the spectacle, while the boy was left to grin nervously as the horror unfolded on his scalp.

Ronaldo has claimed the reason behind his bizarre haircut in 2002 was not a fashion statement but a tactic to deflect attention away from his own injury problems during football’s showpiece tournament.

He had sported his usual close-cropped style for the majority of the tournament before his sort-of-close shave before the semi-finals.

‘Everybody was only talking about my injury. When I arrived in training with this haircut everybody stopped talking about the injury.’

While it took Ronaldo over a decade to come up with that excuse, his feats on the pitch will always eclipse the odd hairdo. He won the Golden Boot for his eight goals at the tournament, including the two that saw off Germany in the final.

That earned him a move to Real Madrid, where he won two La Liga titles alongside Zinedine Zidane and the other Galacticos. He was also named world player of the year for a third time in 2002.