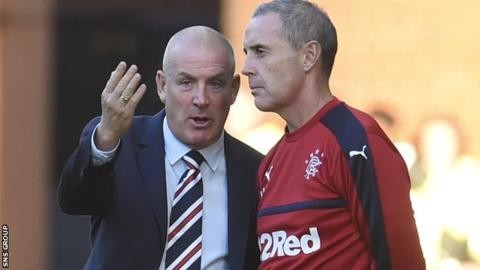 Mark Warburton says Rangers have yet to supply him with an explanation for announcing his departure.

On Friday, the club said they had accepted the resignations of the manager, assistant David Weir and head of recruitment, Frank McParland.

However, Warburton insists this is not the case.

A statement released on his behalf says Rangers have not responded to “key questions” put to them by the League Managers Association (LMA).

“We would like to formally place on record, that at no stage did we resign from our positions at Rangers,” said Warburton.

Following Friday’s club announcement, chairman Dave King issued a statement of his own saying the the trio had come to an agreement to leave via their joint representative.

Warburton, Weir and McParland added via Wednesday’s statement: “At this stage, for legal reasons, it is inappropriate for us to comment in any great detail on our departure from the club.

“It is a matter of surprise to us, and to the LMA, which is advising all three of us, that despite its detailed public statements, the club has not answered key questions put to it by the LMA, in writing, requesting an explanation of why it suggested that we resigned from our positions.”

The LMA statement went to say that it had been “an absolute privilege to work at a club that is so rich in tradition and history”.