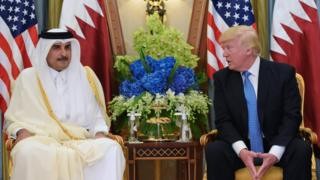 US President Donald Trump has called the king of Saudi Arabia to urge Gulf unity amid an escalating dispute over Qatar’s alleged support for militants.

“His message was that we need unity in the region to fight extremist ideology and terrorist financing,” a US official told Reuters news agency.

Earlier, he said the Saudis’ move to isolate Qatar could mark the “beginning of the end to the horror of terrorism”.

The emir of Kuwait is mediating in the dispute and the president of Turkey has also offered to help, saying isolation and sanctions will not resolve the crisis.

The rift has affected oil prices, hit travel and shipping, and left supermarkets in Qatar short of goods.

What is Trump saying?

Mr Trump had earlier claimed credit for the pressure placed on Qatar, saying his recent visit to Saudi Arabia was “already paying off”.

In a series of tweets on Tuesday morning, Mr Trump accused Qatar of funding terrorism, saying: “During my recent trip to the Middle East I stated that there can no longer be funding of Radical Ideology. Leaders pointed to Qatar – look!”

In his phone call to King Salman, he was quoted by Reuters as saying: “It’s important that the Gulf be united for peace and security in the region,”

Separately, the Pentagon thanked Qatar for hosting the largest US air force base in the Middle East.

Should Trump take a bow for Qatar row?

What do the Saudis want?

Saudi Arabia’s foreign minister called on Qatar to cut ties with Palestinian group Hamas in the occupied territories, and the Muslim Brotherhood in Egypt, if it wanted to end its isolation in the Gulf region.

Adel Al-Jubeir said: “Nobody wants to hurt Qatar. It has to choose whether it must move in one direction or another direction.”

Speaking in Paris, he said the economic measures should put pressure on Qatar to act “like a normal country”.

He name-checked “support of extremist groups”, “hostile media” and “interference in affairs of other countries” as things Qatar would have to change if it wished to restore ties.

He added that Qatar was undermining the Palestinian Authority and Egypt by supporting Hamas and the Muslim Brotherhood, and said stopping these policies would “contribute to stability in the Middle East”.

Hamas is the largest of several militant Islamist Palestinian groups, and was the first Islamist group in the Arab world to win election at the ballot box, before it took power in Gaza after a battle 10 years ago.

The Muslim Brotherhood in Egypt is another Islamist group that became politically active. Some countries designate both as terrorist groups.

What is happening in Qatar?

The BBC’s Barbara Plett Usher in Washington says Qatar, Saudi Arabia and Kuwait have all funded extremists in Syria but pulled back under US pressure, while Qatar, which likes to see itself as a neutral player and potential intermediary, has dealings that are arguably murkier than the others’.

But Qatar’s Foreign Minister, Sheikh Mohammed Bin Abdulrahman al-Than, said: “There is no single evidence that the Qatar government is supporting radical Islamists.”

On Monday, several countries withdrew their ambassadors from Doha, Qatar’s capital, while some cut transport links and gave Qatari nationals two weeks to leave their territory.

Disruption to airspace in the Gulf began on Tuesday morning local time. Doha, Qatar’s capital, is a major hub for international flight connections.

When avoiding Saudi Arabia, their massive – and only – neighbour, Qatar’s planes are having to take more indirect routes, leading to longer flight times.

Qatar is heavily dependent on food imports and residents have been queuing at supermarkets to stockpile.

Does anyone sympathise with Qatar?

Turkish President Recep Tayyip Erdogan said isolating Qatar would “not solve any problem” and that he hoped the sanctions would be lifted soon.