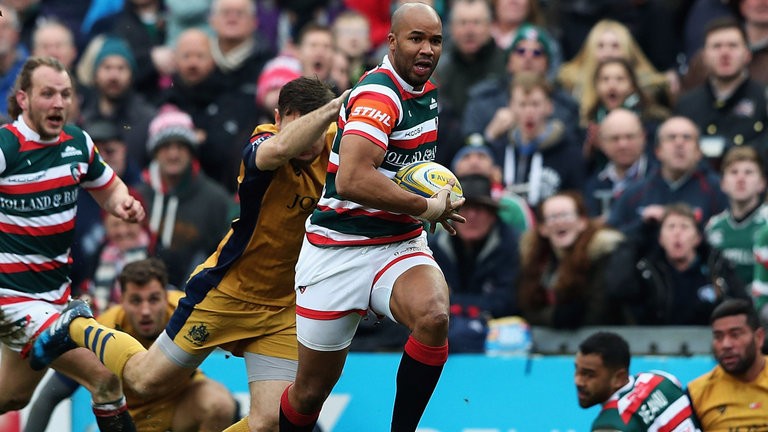 Pat Cilliers, Owen Williams and Telusa Veainu also went over for the hosts as they led 31-10 at the break, with Rob Hawkins going over for Bristol.

Jamal Ford-Robinson grabbed a consolation try for Bristol late on.

The bonus-point win edges Aaron Mauger’s side to within four points of Bath in fourth place and sees them edge six points clear of Harlequins in sixth after the Londoners were beaten 22-12 by the Blue, Black and White at The Rec.

The return of South Africa international Pietersen and Tonga full-back Veainu from injury was key for the Welford Road club, with the pair particularly damaging in the first half.

For Veainu, it was his first club appearance since 23 October, following a head injury sustained on Tonga duty.

Veainu’s break to set Pietersen up for his second score was the pick of the tries, with a dominant Leicester pack also making its mark as Bateman crossed for Tigers’ eighth try from a catch-and-drive line-out 14 minutes from time.

“We want to keep our feet on the ground because there are plenty of things we can do better. The last 20 minutes was a bit disappointing. I thought we could have put our foot on their throat and put them away proper.

“We talked about playing with more confidence, backing our skills and being decisive and we have done that in the last couple of weeks.

“The physicality has been outstanding. Mike Williams was a wrecking ball out there today and Luke Hamilton was outstanding.

On Leicester’s play-off hopes, Mauger added: “We were never out of it, we have always been in contention for the play-offs.

“We believe we will be there at the end. The confidence we have taken from the last two performances is really good for us. The belief has always been there so it’s nice to trigger that with some good performances.”

“We spoke about physicality and looking after the ball and we did neither.

“We turned over too much ball and that allowed them too much field position.

“Against a good Premiership side you are going to struggle if you do that. We fell off tackles and allowed them to get line breaks, and they got the scoreboard moving, so by half-time the game was gone.”