Ozil ‘thinks he is being made scapegoat’ for Arsenal problems 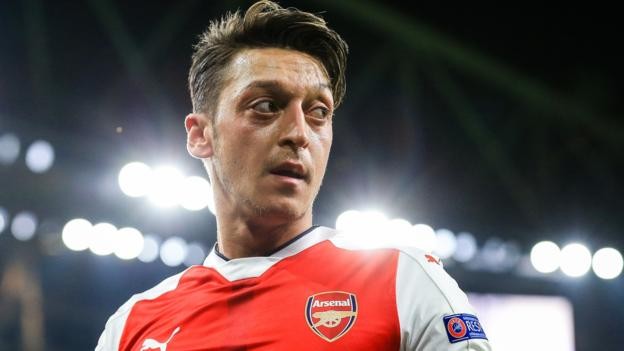 Forward Mesut Ozil believes he is being made the scapegoat for Arsenal’s problems, according to his agent.

“But Mesut feels people are not focusing on his performance; they are using him as a scapegoat for the team after bad results.”

Ozil joined Arsenal from Real Madrid in 2013 for a club-record £42.4m, and came with a reputation as one of the game’s leading playmakers.

But his displays have often been questioned and the Germany international has come under increased scrutiny in recent weeks.

‘Was he the reason Arsenal conceded five?’

Against Bayern, the 20 passes that Ozil completed was the same amount as home goalkeeper Manuel Neuer.

“Bayern had 74% possession,” said Sogut, who is Ozil’s lawyer and representative. “How can someone in the No.10 position create chances if you don’t have the ball?

“In these games people usually target a player who cost a lot of money and earns a lot of money – that is Mesut. But he can’t be always be the scapegoat. That’s not fair.

“Football is a team sport and Arsenal are not performing well as a team. Eleven players were on the pitch but Mesut was singled out for criticism. Was he the reason that Arsenal conceded five goals?

“It started before the match, throughout the week leading up to the game. People started discussing: ‘Should he play? Should he be dropped?’.

“It was as if everyone knew Arsenal would not make it through and we needed a scapegoat. This is not right. You win as a team and you lose as a team.”

Ozil has scored 29 goals in 146 Arsenal appearances and last season created more chances in a single campaign (137) than any other player in Premier League history.

In January, the German was named as his country’s player of year for a fifth time in six years, having helped them to the semi-finals of Euro 2016 and World Cup glory two years earlier. But many have accused him of underperforming when it matters most.

“I don’t agree that Mesut has not had an impact on big matches,” Sogut said.

“What about the win at home to Chelsea this season and Manchester United the year before? What about the games for Germany against Italy and France at Euro 2016?

“People are always saying Mesut is not fighting or tackling, that he has poor body language, but that is how he is.

“Believe me, he is desperate to succeed. If it doesn’t work, he shows his anger and expressions. Was his body language an issue when Arsenal were playing well?

“He is not someone who runs around aimlessly and tackles just so everyone thinks he is fighting. If it doesn’t make sense to run somewhere he will keep that power for the next run.”

‘Mesut is committed to Arsenal’

They face a trip to non-league Sutton United in the FA Cup on Monday.

Ozil is out of contract in 2018 and there has been no breakthrough on talks over a new deal, but Sogut insisted his player is fully focused.

“I don’t think the criticism has affected his performance or his mental state,” the agent added.

“Mesut is committed to the club. There is no doubt that he will perform at 100%, with total professionalism and commitment as long as he plays for Arsenal. Nothing will change that.

“He is sorry to the fans, and he’s sorry that he and his team-mates couldn’t give the fans a better result in Munich.”