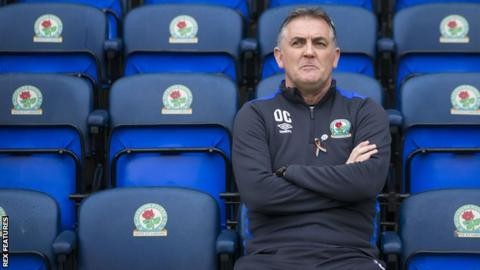 Blackburn Rovers manager Owen Coyle has left the Championship side by mutual consent after eight months in charge.

Blackburn are 23rd in the table, three points from safety, in a season which has also been marred by fan protests against the club’s owners, Venky’s.

“The decision has been taken to give the club the best possible chance of climbing to a position of safety in the Championship,” said a club statement.

Coyle’s last game was the 2-1 defeat in the FA Cup fifth round by Manchester United on Sunday.

Blackburn’s next game is away to fellow Championship strugglers Burton Albion on Friday – with Rovers winless on the road since November.

The club have said that the search for new manager will begin with “immediate effect”.

Owen Coyle’s appointment was never going to be a success in the eyes of the supporters. The abuse from the travelling support directed at him in the recent draw with Rotherham was vociferous and I understand that his position was very much hanging in the balance from then on.

Coyle can rightly claim that he wasn’t backed in terms of budget. He was given £250,000 to spend in the summer while he recouped in excess of £10m and the January transfer window saw him frustrated that the club failed to land his list of potential targets.

The fact that Rovers haven’t been higher than 20th all season is the reason behind his departure. Financially they can ill afford relegation to League One, and whoever comes in has 15 games to save them.

Since the takeover of the club by Venky’s in November 2010, the club are now looking to appoint a seventh permanent manager.