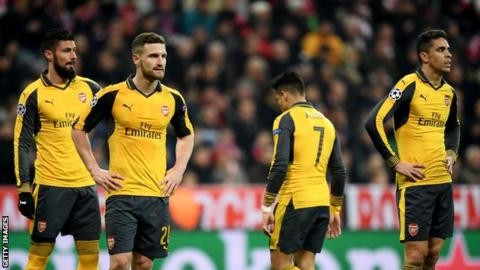 Arsenal boss Arsene Wenger has reached “his lowest point” and may quit the club this season, says his former Gunners captain Martin Keown.

He is one of several of Wenger’s former players who feel they have seen a change in the long-serving boss.

Ex-Arsenal defender Lee Dixon said: “This team is getting no response from him. I’ve never seen him like that.”

Frenchman Wenger, at the helm since 1996 but whose contract expires at the end of this season, has not won the Premier League since 2004, but Keown told BT Sport: “Arsene must be considering his future now.”

“That is the first time where I’ve seen him where I’ve thought, ‘he thinks it’s time’. The fact that he hasn’t been able to get a response from the players in the last few weeks might be the final straw.”

Arjen Robben fired German champions Bayern into the lead at the Allianz Arena on Wednesday, but Arsenal fought back and equalised when Alexis Sanchez followed up and finished his own saved penalty.

However, in the second half the Gunners capitulated, as Bayern excelled in a 10-minute period during which Robert Lewandowski restored Bayern’s lead before Thiago Alcantara scored twice.

Substitute Thomas Muller scored late on to surely put the tie beyond the Gunners.

Keown – a defender who made 449 appearances for Arsenal – said recently he expected his former manager to get one more season. However, after watching the Bayern defeat as a pundit for BT Sport, Keown questioned whether he should stay.

“It’s almost embarrassing. Outclassed, outplayed,” he said. “I can’t ever say I’d like to see him go (but) this is his lowest point ever as Arsenal manager.”

Last week, former striker Ian Wright, who scored 185 goals for the Gunners from 1991-98, told BBC Radio 5 live he did not expect Wenger to stay on next season.

After the drubbing in Germany, Wright posted his frustrations on social media and declared he was “not watching anymore”.

Bob Wilson, goalkeeper in the first Arsenal side to win the double in 1971, told BBC Radio 5 live on Thursday: “I wouldn’t be at all surprised that Arsene now, with the amount of headlines that are coming his way, will look at that and say ‘two decades’.

“He might just look at that and say ‘OK enough is enough’ because I think as a human being you can only take so much.

“He’s a very sensitive guy and he’s hurt, I doubt he will sleep very much between now and a horrible game on an artificial pitch at Sutton.”

Reaction to the Bayern beating

Arsenal’s only major silverware in recent years has been consecutive FA Cups in 2014 and 2015.

Successive defeats by Watford and Chelsea dented their league campaign, and although Wenger’s side returned to winning ways with a 2-0 victory over Hull last weekend, the Gunners are fourth in the table, 10 points behind leaders Chelsea.

Former Chelsea winger Pat Nevin was at the Allianz Arena for BBC Radio 5 live and described Arsenal’s performance as “shambolic”.

“The negativity before the game feels more like a realism,” he said. “Arsenal were totally outplayed by a team who are good but weren’t utterly brilliant.

“The one team at the top level they have beaten is Chelsea with that 3-0 (at the Emirates in September).

“Other than that, they’ve got draws, they’ve been beaten and it’s the top ones – I include Everton in that as well – they don’t seem to be able to overcome them.

“It’s exactly the same in the Champions League and it’s a real shame, it just feels very close to the end. I’ve never said it before about Arsene but it does feel that way now.”

“They looked spineless,” the ex-England captain said on BT Sport. “You want to see fire in their belly and that’s the most disheartening thing for me.”

Has Wenger lost his touch?

The Times’ chief football writer Henry Winter described the Gunners as a “laughing stock”, adding that he felt Wenger’s best days are behind him.

“He has lost his leadership skills, there’s no invincible streak in him any more,” he said.

“From top to bottom there’s no leadership. They have a silent owner who is sleepwalking towards the abyss. Wenger has been overtaken by Conte, Klopp and other managers.”

How did the papers react?

… and what you said

Collated from comments below the match report

Harry Martin: Wenger gave Arsenal the greatest run of success they will ever have. His time in charge is as good as it gets for them and at 67 he’s not going to improve. Football is cyclical and Arsenal’s run of success (CL every year) is coming to a close. Be grateful for what you’ve had Gooners because you won’t find a better manager than him prepared to come to Arsenal. These are the glory years.

ThePundit: Has anyone seen Mesut Ozil? He has been missing since last November, last seen strolling around the Emirates against a mediocre Premier League team. If found, please contact A. Wenger.

BlueIsTheColour: Arsenal are a laughing stock in Europe, there is no point qualifying for the Champions League just to make up the numbers. Arsenal are more interested in their balance sheet than their trophy cabinet.

cliffbayfan: Pathetic, I think it sums this up. Spineless, lack of talent, gave up, and totally out-thought and outclassed. Whether time is up for Wenger, I don’t know… but this was an embarrassment.

XTStevie1873: Tonight proves that English teams are only good in England as this Bayern side like Barcelona have been on the slide and are nowhere near as good as they have been over the last 4-5 years. But they still whacked Arsenal at a canter…