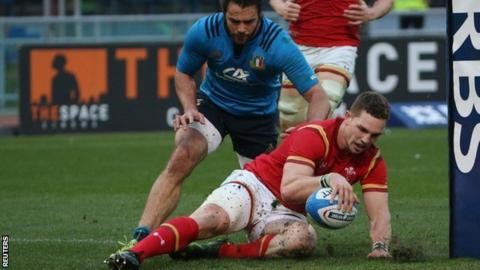 Wing George North has recovered from a bruised thigh to start for Wales in Saturday’s Six Nations match against Scotland at Murrayfield.

The 24-year-old replaces Alex Cuthbert in the only change from the 21-16 defeat by England in Cardiff.

Ross Moriarty continues at number eight, while Taulupe Faletau remains on the bench for Rob Howley’s side.

There is just one change among the Wales replacements, as second row Luke Charteris replaces Cory Hill.

North was selected for the match against England on 11 February but was withdrawn an hour before kick-off.

The Northampton Saints wing was replaced by Cuthbert, who was criticised after England scored a late try to snatch victory at the Principality Stadium.

“We have been able to select from a position of strength which is a huge positive and it is good to welcome George [North] back into the starting XV and Luke [Charteris] on to the bench,” said Howley.

“In terms of intensity and performance, we stepped up a level against England and we need to take the positives from that performance and take it into 80 minutes against Scotland at Murrayfield.”